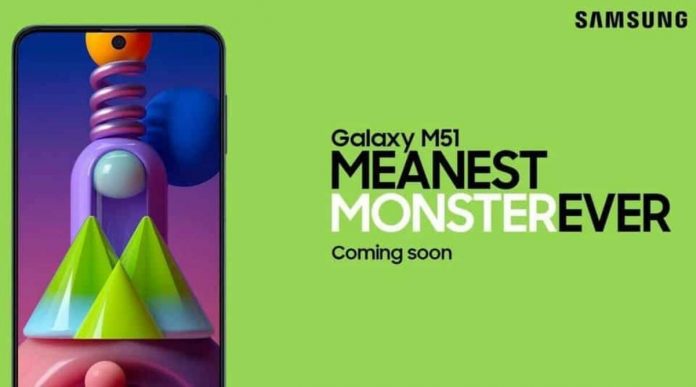 Samsung introduced a new mid-range smartphone in its famous M-series. The new phone comes at a price point that will challenge there rivals like Poco X2, OnePlus Nord and the Realme 7 Pro that has just been launched. The Samsung Galaxy M51 was launched in India and there’s a big 7000mAh battery on the new smartphone. Samsung claims that the Galaxy M51 is India’s first smartphone to feature a 7000mAh battery.

The new Samsung Galaxy M51 comes in two versions. the South Korean company has priced the latest smartphone at range 24,999 for the model with 6 GB RAM and 128 GB of internal storage. The second version is priced at 26,999 and gets 8 GB of RAM but the same amount of storage as 128 GB. The product will be made available on Amazon.in, Samsung.com and on 18 September, from noon, and also in select retail stores.

The business in Amazon.in offering an exclusive launch bid. Limited duration of promotional launch offer will be available on Amazon.in from 18 September to 20 September 2020. According to the company, when shopping the Galaxy M51, consumers using HDFC credit and debit cards will receive up to 2,000 instant cashback on both EMI and non-EMI purchases.

The Galaxy M51 features an octa-core CPU with a Qualcomm Snapdragon 730G. The chipset is clocked as high as 2.2 GHz. This chipset, Samsung claims, the new Galaxy M51 the most powerful smartphone in the M series. Compared to the Snapdragon 730, the Qualcomm Adreno 618 GPU on Snapdragon 730 G offers 15 per cent faster graphic rendering.

The camera on Galaxy M51 sports a quad-camera setup, with Sony IMX 682 64MP main sensor. On Galaxy M51 the 12MP Ultra-Wide lens has a field of view of 123 degrees. The phone’s got a 5MP macro lens as well. The fourth lens for portrait shots is a 5MP depth sensor.

Samsung has installed a 32MP camera on the front which also supports 4 K video recording as well as slow-mo selfies.

The Display in Galaxy M51 comes with a 6.7-inch sAMOLED Plus Infinity-O panel to house the 32MP lens with a punch hole. The sAMOLED Plus display on Galaxy M51 is up to 13 per cent thinner and weighs up to 12 per cent lower than traditional sAMOLED screens, according to Samsung.

Battery: One of the phone’s main USPs is its battery. The 7000mAh battery for the Galaxy M51 comes with a Form C 25W fast charger in the pack. Samsung argues the charger will charge the battery in less than 2 hours. Galaxy M51 also comes with reverse charging and a Type C to Type C cable.