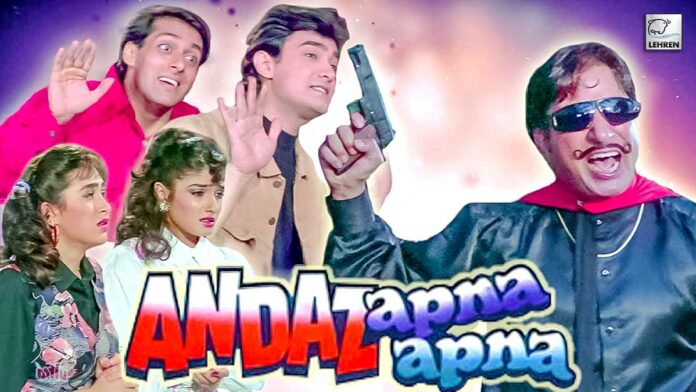 Not that many films have managed to stay relevant and amuse generations of audiences like Andaz Apna Apna did. The film was released in 1994 and was a smashing success with its incredible casting, humor, and strong plotline. The legacy and laughter continue even today, after 27 years.

Everything about the film is endearing, whether it is the Salman-Aamir Khan camaraderie, the perfect comedic timing of Paresh Rawal, or the distinctive charm of Shakti Kapoor. Andaz Apna Apna is a trendsetter in the slapstick comedy genre and is the fourth highest-rated film of all time.

Normally, in Bollywood films, heroes are the ones who steal the spotlight. But in Andaz Apna Apna, the villains have made history too. The film had, contrasting typical Hindi cinema’s blood-angry villains, Shakti Kapoor as Crime Master Gogo.

The character is on the list of the most beloved villains ever, making audiences across India laugh harder every time they watch the film. On par with Shakti Kapoor was Paresh Rawal as Teja. His brilliant double role added the right amount of excitement and humor to the film.

The adorable on-screen bromance between Amar and Prem is one of the main reasons to watch Andaz Apna Apna. Theirs is one of the most iconic friendships in Bollywood history.

Amar’s street-smart antics paired with Prem’s innocence is the perfect recipe for comedy. Their priceless expressions and funny love-hate relationship will make one shed tears of joy.

Andaz Apna Apna, being the fourth highest-rated Hindi film on IMDb, was much ahead of its time. It has the perfect mix of parodies of the industry’s cliches, and some fast-paced comic elements, that are sure to keep you laughing long after the credits have ended.

If words have the power to turn the world upside down, then the funny dialogues from Andaz Apna Apna will make one hoot with laughter. “Suno Suno Duniya Ke Logo – Sabse Bada Hai Mister Gogo”, “Shabash Mere Cheetay”, “Do dost ek hi pyali mein chai peeyenge, isse dosti badhti hai” are a few of such quotes that have lived in our hearts.

Author - January 20, 2022
0
As we all know the current situation in Kerala as it deals with the number of covid cases and the test positivity...