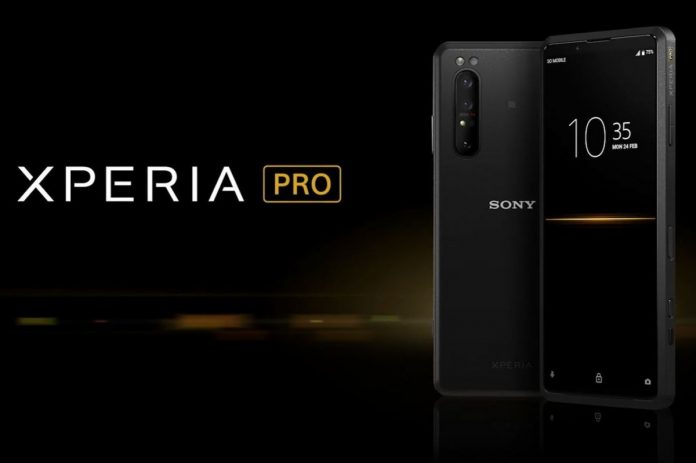 During an online event, Sony has launched their new smartphone Xperia Pro, on Tuesday evening along with the Alpha 1 full-frame mirrorless camera. The Xperia Pro is a flagship to the company. It can be used as an external monitor during stills and video capture when it connects with a professional camera. It is the world’s first smartphone that has a feature of  HDMI connectivity, which can transfer data using 5G. The smartphone comes with a 4K resolution and HDR OLED display, quad rear camera setup, and advanced photography updates. The phone comes under a premium level. The new Xperia Pro costs $2500 in the US  makes it more expensive than the 13-inch Macbook Pro.

Sony Xperia Pro uses the technology of AF company’s latest Alpha 1 camera. The phone has the ability to real-time eye autofocus not only humans but also animals. With the help of Xperia Pro, it is possible to cover 20FPS continuous shooting. The cameras are in the rectangular model which holds in the back. Xperia Pro has four rear cameras and has a wide camera with a12-megapixel, telephoto camera12-megapixel, ultra-wide camera12-megapixel, and a 3D time-of-flight (ToF) camera. In low light scenarios, this ToF camera helps to improve Automatic Focus performance. The front-facing camera comes with an 8-megapixel to click selfies on the phone.

7-nanometer based Snapdragon 865 SoC is used to power up the smartphone. The latest version of Android 10 is used in Sony Xperia Pro. The phone is available only in a black color variant, which has a 4,000mAh battery capacity with 21W charging speeds. Also, it includes a headphone jack and dual-SIM connectivity. The phone arrives in the market with a 512GB of internal space and 12GB of RAM. Xperia Pro can use as a live streaming device, with the help of an HDMI output, the phone can live stream on YouTube directly from any camera.

In India, there is no option to launch Xperia Pro. Hence, in the US, the Xperia Pro (at $2500) costs more than a 13-inch MacBook Pro ($1,299 for 256GB storage). The laptop can’t shoot good videos, it’s an essential part of a vlogger’s kit to edit videos and upload to the media. The users can certainly do content creation with a good camera smartphone and couple it with a MacBook. It is a fact that Xperia Pro is a niche product in a niche market. Thus, if Sony can match it with the expected sales projection for the smartphone will be interesting to see.