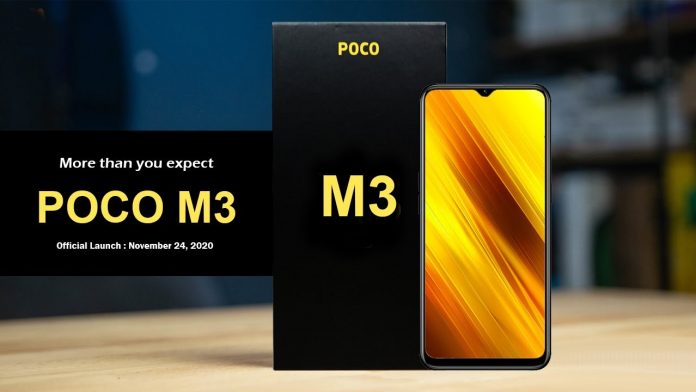 In India, it confirmed that the launch of the Poco M3 release by February 2, 2021. The launch was confirmed by a tweet on Wednesday afternoon as well as the media invites sent out by the company.  Already the new smartphone is introduced in other markets including Europe, Indonesia, and Taiwan. The confirmation made by the company was that the sale of smartphones is expecting through Flipkart in India. Even though the features are not been revealed, most of them are known. There could be slite changes to the Indian retail unit compared to the global variant, but most features are likely to be the same.

Poco launched as a sub-brand of Xiaomi in 2018, and the first smartphone was – the Poco F1- which offered features including top of the line specifications at an affordable price.

The Poco M3 is likely to feature an HD+ resolution with a 6.53-inch display. It will be backed by 4GB RAM and up to 128GB internal storage capacity, and powered by Qualcomm Snapdragon with a 662 processor. The smartphone is expecting to ship with the operating system Android 11. The Poco M3 likely comes with a triple camera set-up with a 48-megapixel primary lens with f/1.79 aperture, a 2-megapixel depth sensor with f/2.4 aperture, and a 2-megapixel macro camera lens with f/2.4 aperture. The device also gets an 8-megapixel selfie camera.

Major upgrade where the Pocco M3 focuses on its battery. Comparing with the past generation, Poco M2 was a 5000 mAh battery, Poco M3 comes with a 6000 mAh battery pack with support for 18W fast charging. This smartphone may challenge the present trending midrange phones.