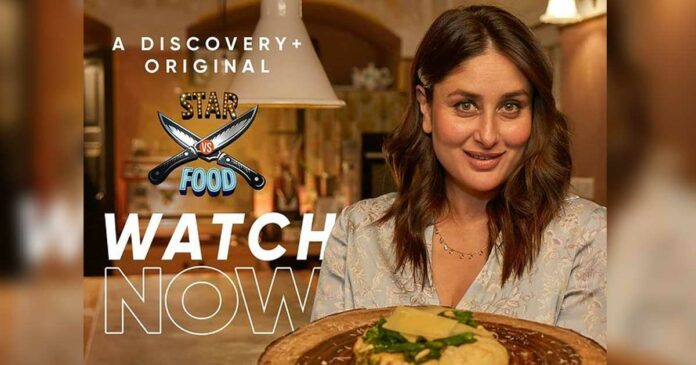 Discovery+ has revealed the trailer for Season 2. In the teaser, we can see Ananya Panday, Anil Kapoor, Badshah, Janhvi Kapoor, Nora Fatehi, and Zakir Khan striving in the kitchen.

In a collaboration with ‘Korea Tourism Organization’, Star Vs Food sees chaos stemming in the kitchen, as the celebrities struggle to beat eggs and try to sharpen their craft.

Talking about the show, according to Jahnvi, the experience of cooking a Korean dish was unparalleled as she was on the knife’s edge this time unlike enjoying her meal in a restaurant.

Korean is one of the toughest cuisines to prepare, but Chef Basu’s enthusiasm motivated her to attempt even after so many blunders and ‘Oops’ moments in the kitchen! It makes her incredibly proud to conquer her kitchen fear and ace something so difficult.

In the promo, Janhvi is seen trying to imitate Salt Bae, as she practices cooking. Anil Kapoor cracks his one-liners as usual, while Badshash remains bewildered on what to do next.

On the other end, in the teaser, Ananya asks if she would get a job in the kitchen. In a statement, Ananya said that her sister Rysa bakes and knows how to cook. And she knew that this is not gonna be easy for her as her parents have never seen her in the kitchen, unlike her sister. So now she’s pretty excited after taking up this challenge.

Meanwhile, according to Nora Fatehi, Nothing brings people together like good food. So when she got the chance to cook traditional Moroccan food with the chef, she couldn’t pass it. She has witnessed her dad cook various delicious meals as he is a chef and she always wanted to wear an apron and cook something for her friends and family. So Nora Fatehi is hoping to make her family proud of her cooking skills.

Zakir Khan’s unsavory gags peppered with some cooking rapper Badshah’s invaluable comeback after seeing his cooking creation and a ton of extra such loopy cooking strive together with delicious meals will certainly make you hungry.

Like the former season of Star vs Food, episodes will stream weekly, and the celebrities will likely be setting themselves up towards the dilemma of cooking will likely be paired with an expert chef to tutor them to prepare dinner, mouth-watering dishes for their family members.

Featuring Mumbai and Delhi’s extensive fine-dining eateries like Silly, Moner, Blah!, Chi Ni- The RosJamun and Jamun, the present pledges to be a delicious deal for audiences throughout the country.

It will premiere on 8 September, the trailer which is launched right this moment gives you a sneak peek of what happens when our favorites go behind the scenes, to serve a chef-approved foodie expertise for their particular company.

Author - January 21, 2022
0
The focus at Criesse is on providing actual solutions like superior profile, feedback-successfully, and cost-efficient PR promotions for companies and individuals who want...