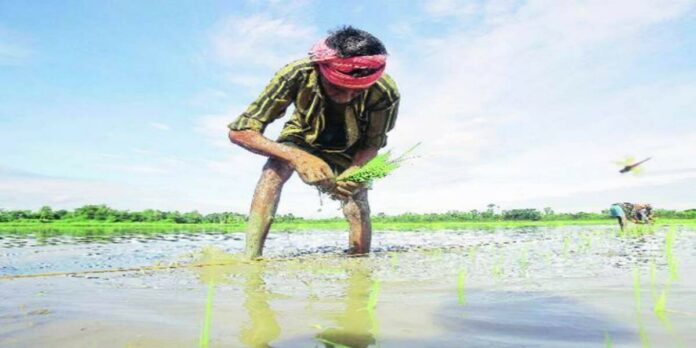 During the current monsoon season, more than seven lakh farmers in Maharashtra have contacted insurance companies to report crop damage caused by heavy rainfall, according to officials.

Crop insurance company representatives must personally visit the fields to examine the losses, and the farmers will be paid the insurance amount based on their report, they stated.

State agricultural commissionerate’s chief statistical officer Vinaykumar Awate told PTI that until August 1, a total of 2,56,985 letters were received from farmers across Maharashtra informing them of extremely heavy rains that had caused crop damage.

According to the source, the figures could rise even further because data of calls made over the weekend will be updated in the system on Monday.

He claimed that in addition to crop damage, the farmers alerted him about the washing away of their farm soil, damage to livestock shelters, and other difficulties. After torrential rains pounded the state’s Marathwada region last week, the number of such calls from farmers skyrocketed, he claimed.

The official stated in response to a query that they held a meeting with officials from the Union administration last week and discussed the issue and in the aftermath of the heavy rains in the Marathwada region and north Maharashtra, the central government has expanded its technical assistance to assist them in accepting a greater number of such calls.

He previously stated that there were difficulties in the system due to the increase in the volume of such calls from farmers clogging the phone lines or causing the servers to go down.

The officer further added that however, with the assistance of the Union government, they were able to resolve these concerns. Other methods, aside from phone calls, are available for farmers to register their names with insurance firms for damage surveys.

Since the implementation of the crop insurance plan for farmers, insurers have been required to keep track of every such call from growers.

Farmers can report agricultural damage by calling a number provided by the insurance company, sending an e-mail, or calling the local revenue officer. They can also notify their local bank branch, which will alert the state agriculture department about their notification call on the shared platform.

The call must be made within 72 hours of the farmer’s crop loss. Farmers can also use an app to report crop damage, according to officials.

Author - September 13, 2021
0
Amazon, one of the largest e-commerce companies in the world, is planning to launch wealth management services in India.