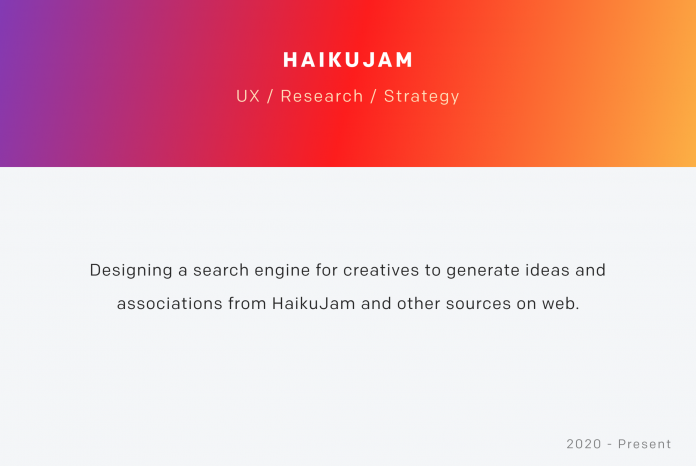 The goal of Inspo is to make the start of creative processes less daunting, more productive, and enjoyable. The first-of-its-kind search engine for inspiration was created to help freelancers, companies, and creative agencies expand their creative thinking.

For content development, campaigns, advertisements, moment marketing, brainstorms, pitching, or any other creative activity, the AI-human hybrid tool can develop GPT-3 thought-starters in a flash and gather relevant inspiration from sources throughout the web on any topic.

Inspo was created with a single goal in mind: to inspire on demand. It was created by Dhrupad Karwa and Andrew Leung, the inventors of the HaikuJAM social writing smartphone game, which expanded to over 1 million users from 144 countries who contributed 100 million lines of collaborative poetry.

The present creative ecosystem consists mostly of technologies that focus on the last phases of a creative process, such as execution, monitoring, dissemination, and monetisation. However, there is yet to be a substantial platform to aid with ideation, brainstorming, and inspiration collecting, all of which are essential for any creative workstream.

As a result, creative thinkers have had to rely on Google, which was created to ‘inform’ rather than ‘inspire.’ Inspo was created with the goal of offering inspiration at its heart, as current options failed. A simple keyword search (e.g. coffee, motorbike, fitness, etc.) or clicking on an event or trend on Inspo’s Inspiration Calendar (e.g. World Environment Day, #LockdownRecipes, etc.) are all that is required.

The programme creates suitable thought-starters (using GPT-3 and HaikuJAM’s creative connections), which may then be further contextualised for a brand or topic using AI Lenses (e.g. coffee inspiration for Netflix). It also curates’ cultural content from sites like Goodreads, Twitter, Reddit, 9GAG, Creative Blogs, Unsplash, Metrolyrics, and many others.

In addition, Inspo analyses sentiment and uncovers unexpected connections in collaborative poems created by Millennials on HaikuJAM. Through Inspo’s interaction with the graphic design site Canva, users may store their favourite ideas on “Inspiration Boards” and even transform them into visual creatives.

Around the past year, Inspo has been in private beta, and it has already helped inspire creative thinkers at companies like Dentsu, Royal Enfield, Jio, Tinder, and Ogilvy, as well as a few hundred individual freelancers, all over the world. Dhrupad Karwa, CEO and Founder, has been actively ‘building in public,’ sharing the start-up experience and pondering on the nature of inspiration on his personal Twitter account.

Around the past year, Inspo has been in private beta, and it has already helped inspire creative thinkers at companies like Dentsu, Royal Enfield, Jio, Tinder, and Ogilvy, as well as a few hundred individual freelancers, all over the world. Dhrupad Karwa, CEO and Founder, has been actively ‘building in public,’ sharing the start-up experience and pondering on the nature of inspiration on his personal Twitter account.

With the goal of reaching as many people as possible with Inspo, he and his 15-person remote team chose a freemium business model, allowing anybody to try out the software and its naturally inspiring UI. Users may acquire infinite material on any topic for as little as USD 10 a month, which is the price of a pizza.

“Inspiration is one of the most crucial yet misunderstood components of the creative process. Though ethereal in nature, its ramifications are unmistakable” said, Dhrupad Karwa, HaikuJAM.

“Lacklustre effort, burnout, and creative blockages are unavoidable in a society that requires constant creative thought but has a finite supply of the inspiration needed to power it. “Inspo is here to make sure that the supply of actionable inspiration never runs out and that our creative tanks are constantly full,” Karwa explained.

Inspo, which operates at the crossroads of AI and human creativity, intends to be the go-to platform for individuals at the start of their creative processes, helping to usher in a future where 7.8 billion people think inspired.