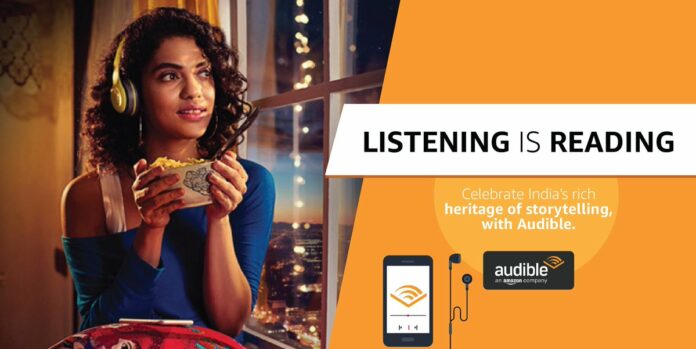 Amazon, one of the Big-Tech companies in the world has introduced another captivating offer to their Indian customers. It considers India to be one of the fastest-growing markets globally. Audible, a subsidiary of Amazon provides online audio books and podcast services.

The Audible has expanded its catalog in India with an enormous collection of over 15,000 titles which transports customers to the world of listening. This offer is available to customers who are part of its Rs.199 monthly subscription. The new feature includes free and paid podcasts as well as Audible originals which has become a platform where actors such as Kubbra Sait, Sayani Gupta, Sanya Malhotra, and others can narrate their stories.

The Vice President and country general manager of Audible India, Shailesh Sawlani stated that the Coronavirus pandemic has increased the demand for both paid and free titles in India. So, the company decided to double down its offering on these two fronts. He addresses that the platform has a slate ready for the next 12-18 months which includes adaptations of international titles in local languages and originals.

The Karadi Tales, Dharmayoddha Kalki by Kevin Missal, The Panchatantra, and Autobiography of a Yogi by Paramahansa Yogananda are the Indian audiobooks included in the current slate. The Audible Originals includes a wide range of collections, some of them are Zen: A Way of Living written and voiced by Om Swami, The Last Girl to Fall in Love written by Durjoy Datta and narrated by Prateik Babbar and Rasika Dugal, and many more.

Other available audios include Global audiobooks such as My Man Jeeves by P.G. Wodehouse and The Prophet by Khalil Gibran, voiced by Riz Ahmed. The platform also includes free shows which include Darmiyaan produced by Ekta Kapoor, and a romantic comedy featuring Bollywood actors Varun Sharma and Sanya Malhotra.

Audible India is rich for its sleep-related content. During the pandemic, it introduced sleep series intending to produce sleep and relaxation-focused audio series. Some of the top sleep series in the list include Audible Sleep Collection, which provides access to bedtime stories, ASMR (autonomous sensory meridian response), and Sound Baths to help people stay calm.

Vikas Joseph - November 26, 2021
0
The All Kerala Pineapple Farmers'' Association, one among the actually the most significant inside the country, by and large, has really sent...