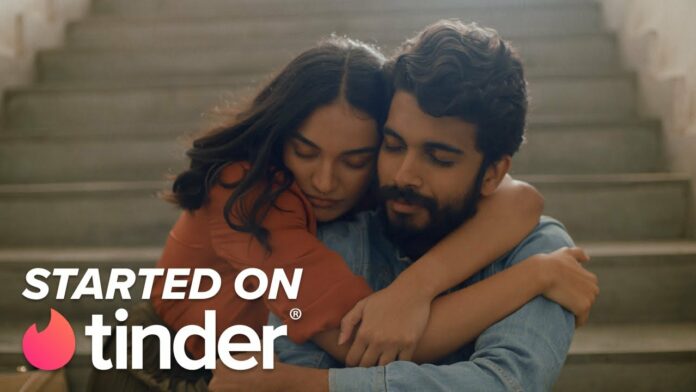 Tinder, the world’s most popular app for meeting new people, recently debuted a series of heartfelt short films in India.

It depicts genuine moments from many dating tales and different connections that began on the platform.

Tinder is a geosocial networking and online dating app. Users “swipe right” to like or “swipe left” to hate other users’ profiles, which feature a photo, a brief bio, and a list of their interests.

Tinder is known as the “hookup app,” but it’s a dating app that, like its competitors, promises to provide a pathway to partnerships and even marriage for a more tech-savvy generation.

It challenges traditional dating culture, which entails going out and interacting with strangers in public places. Instead, it brings that varied dating pool to you, which you might – or might not – have had access to in a bar or club.

Tinder employs a “double opt-in” mechanism, in which both users must “swipe right” to match before exchanging messages.

The feel-good ad, which is set to Hanita Bhambri’s music, features four short videos that are versions of the millions of first kisses, first dates, first moves, making up, and more than all began on Tinder.

Tinder’s new features, such as Explore, Hot Takes, and Vibes, continue to broaden the possibilities of online dating in this series of films.

The new set of industry-leading features and social experiences gives users additional options to find the appropriate person and navigate connections based on similar interests, creating the groundwork for a deeper, richer Tinder experience in the future.

Tinder has been instrumental in assisting young Indians in creating their own set of norms for love, dating, life, and everything in between. Tinder has long emphasized the value of making human connections, whether it’s looking for love or finding someone who matches your mood.

Tinder is pushing Gen Z in India to put themselves out there and ignite connection, chemistry, and serendipity in this world of limitless possibilities with its new campaign.

Every day, millions of our members have the opportunity to meet a varied group of people who have common interests. This new commercial is a celebration of unlimited possibilities and a reflection of innumerable firsts that began on Tinder.