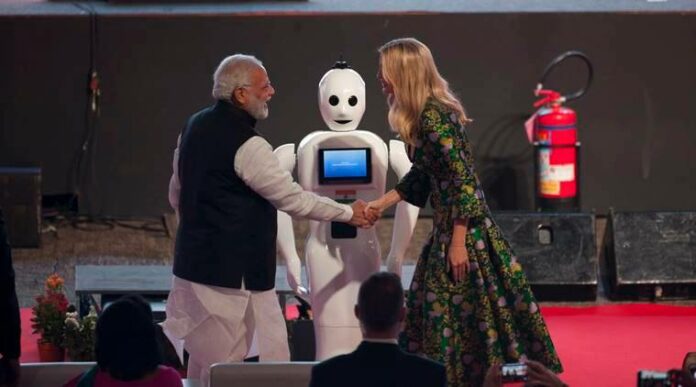 Robotics is blooming in the Indian domestic market and has recently gained traction in the global tech market. To highlight Indian robots, educational institutions and robotics firms have launched competitions and seminars for students and working professionals. To produce advanced features, robots in India use a combination of major cutting-edge technologies such as AI, robotics, and IoT.

Here is a list of the top 5 Indian robots well-known in the global tech market with the ‘Made In India’ tag:

Dinesh Patel of Uttar Pradesh created the world’s first handmade artificially intelligent multilingual social and educational humanoid robot, Shalu, out of waste materials such as plastic, cardboard, wood, and other wastes. Shalu can speak in 47 languages which include 9 Indian and 38 foreign languages.

The ‘Made in India robot’ caters to the women and girls of India in support of the Government of India’s ‘Beti Bachao Beti Padhao’ mission. To identify and recall individuals and their identities, Shalu uses AI and face recognition technologies.

With the integration of AI and robotics, the robot is a research assistant with integrated vision and sound processing capacity. It can walk, talk, and dance in response to human instructions. It is well-known for reacting like a human child by playing football or performing push-ups with open-source code.

Mitra Robot is a humanoid robot built by Invento Robotics, an Indian startup founded by Balaji Viswanathan in Bangalore.

This five-foot Indian robot was launch by Prime Minister Narendra Modi and Ivanka Trump during the Global Summit for Entrepreneurship (GES). Robotics and AI have created the robot to welcome clients through facial recognition technology, speech recognition touchscreen on their chest and autonomous navigation. One of Mitra’s intelligent functions is that it can efficiently and effectively understand different languages.

Kempa is a humanoid robot powered by artificial intelligence built by Sirena Technologies, a Bengaluru-based company. It will be situated at Bengaluru’s Kempegowda International Airport to welcome and direct travellers to popular destinations in English and Kannada.

Sandy is a well-known humanoid robot created by India’s i-Brain Robotics. It is the world’s first human-sized humanoid robot with artificial intelligence. This creation of Sandy, standing five feet tall, is made to mimic human reactions precisely with a cosmic network of sensory circuits. It designs to benefit a variety of industries, including hospitality, finance, and healthcare.