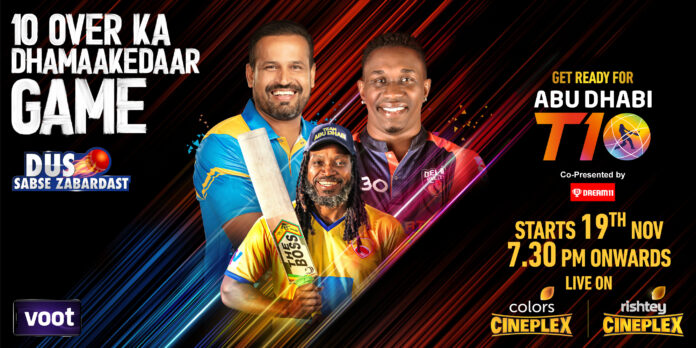 Mumbai, 19th November, 202: Starting 7PM today, Viacom18, one of India’s leading media & entertainment networks, will bring to viewers the most anticipated and edge-of-the seat format of cricket, the Abu Dhabi T10 league. In a run up to the series and to maintain sustained momentum, the network has started an unparalleled marketing blitz, building fandom amongst cricketing fans in India. The Abu Dhabi T10 league is Co-presented by Dream11 and has on-boarded Fairplay as Digital Sponsor on Voot.

Sapangeet Rajwant, Head of Marketing & Digital – Hindi Mass Entertainment, Viacom18 said, “Cricket and cinema are the two biggest pop culture influencers in India and with Abu Dhabi T10 League we are coopting the strength of our leading movie channels and the fandom of cricket. The Abu Dhabi T10 tournament has emerged as one of the most entertaining spectacle events in the sporting calendar since its launch. Our aim will be to enhance the overall experience of viewers and reaching out to the mass, cricket-crazy audience in India to increase the fan base and popularize the event in the country. We have planned an extensive marketing initiative to scale the propensity of the biggest T10 cricket extravaganza, thereby achieving our desired goals.”

Viacom18 has initiated a high impact 360-degree mix of marketing initiatives starting from November 15th to build up the excitement for one of the most awaited properties in the world of cricketainment. The network is driving communications on TV for the league across 50 channels in the movies, music, regional GECs and news genre along with a promotional plan for Cable across Maharashtra and Gujarat market as well as collaboration with several DTH providers. Along with OOH hoardings across Mumbai, Delhi, Kolkata and Chennai markets there is also a robust print ad plan underway.

Leveraging the digital outreach, carousel ads and push notifications will be driven across Jio platforms. On social media, push across Facebook, Instagram, Twitter and YouTube is targeted towards reaching out to cricket and sports fans as well as engagement will be driven through hashtag challenges. Digital impact amplification will also be done through channels/platforms with Google products and a host of cricket websites.