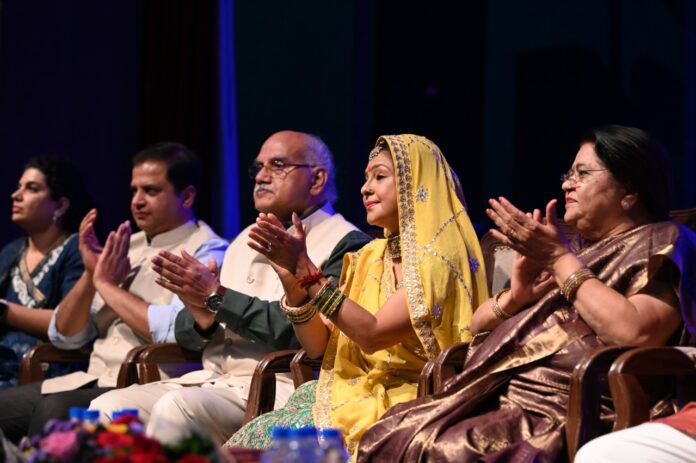 Bhopal October 3, 2022: The occasion was the closing ceremony of Vishwarang Pustak Yatra, the evening at Rabindra Bhavan was dedicated to the famous folk singer Malini Awasthi’s melodious songs. The event was organized by Rabindranath Tagore University and Tagore World Center for Art and Culture – “Lokrag”. On this occasion Malini Awasthi was honoured with ‘Sharda Chaubey Lok Samman’ and Dr. Vinita Choubey books – “Sanskar Geet” and “Chaturvedi Chandrika”, ‘125 years of social change’ were inaugurated at the ceremony. On this occasion, Chancellor of Rabindranath Tagore University and Director of Vishwarang, Shri Santosh Choubey spoke about the unique initiative of Pustak Yatra that was the first phase of the fourth edition of Vishwarang, leading to the main festival that will celebrated from 14 to 20 November. Adding to Shri Choubey Ji’s announcement, Dr. Aditi Chaturvedi Vats, Co-Director of Vishwarang said that the ambition Vishwarang is to touch upon subjects relevant to children and youth. While speaking of her felicitation, Folk Singer Malini Awasthi appreciated the initiative taken for Pustak Yatra and emphasised how books are an integral part of our lives and that everyone should inculcate the habit to read the best literature. Drawing a parallel, she mentioned how folk songs have the same vastness as that of books.

Malini Awasthi enthralled the audience with the song ‘Udi Jaao Re Sugna Ganga Paar…’ by calling upon Goddess Durga, invoking her blessings on the occasion of Navratri. She also performed on popular numbers such as ‘Nimiya Ke Dar Maiya…’. Sohar’s bandish “Chhapak tree chhiuliya…”. She performed Aalha singing of Bundelkhand in which the story of Mangalpande was narrated. Presented the bandish was her team Sachin was on the keyboard in the Dharam Singh on the harmonium, Mukesh Madhukar on the tabla, Amit on the dholak and Dharmendra on the octopod.

The program was conducted by Shri Vinay Upadhyay, Director, Tagore World Center for Art and Culture.