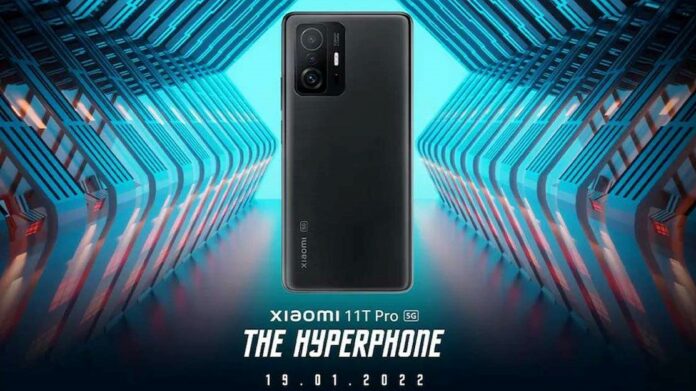 Xiaomi’s new smartphone, 11T Pro will be rolling out in India on Amazon which will feature Qualcomm Snapdragon 888 5G chipset.

The Chinese technology company, Xiaomi is a consumer electronics and smart manufacturing company with smartphones and smart hardware connected by an IoT platform at its core.

Manu Jain, Xiaomi’s Global Vice President was the one who announced the upcoming smartphone.

The company had already released it in China under a different name, along with two other smartphones in the Note 11 category.

It is now preparing to introduce the Xiaomi 11T Pro, a mid-range smartphone that will compete with companies such as Realme and Oppo.

The VP of the company had tweeted about the release of the brand-new smartphone, under the hashtag #HyperchargeRevolution.

He mentioned, “Where ‘dragons’ become champions,” talking about the phone’s Qualcomm Snapdragon 888 5G.

“The Hyperphone” as the company calls it, will be launched on Wednesday, 19 January 2022.

Talking about the features and details of the new phone, it comes with a 120W fast charger inside the box.

It will feature a punch-hole display with a refresh rate of 120Hz and the screen will be of the 10-Bit AMOLED display, 1.07 billion colors.

Xiaomi intends to ramp up the photography with a 108MP lens in the triple camera slot at the back, while the selfie lens could have a resolution of 32 megapixels.

It might have a 6GB RAM and 128 GB ROM configuration.

As they gear up to launch the smartphone, they have also come up with a contest where they can win a Xiaomi Smartphone.

By answering a question using the #HyperchargeRevolution hashtag on Twitter and tagging Xiaomi India and Amazon India’s Twitter handles, they have a chance to get this latest phone.

The Xiaomi 11T Pro is expected to run on Android 11 with Xiaomi’s MIUI layer on top, the company also said that the phone will also include Harman Kardon sound.

Celestial Magic and Meteorite Black are the two-color options for the smartphone.

Chahhat Guppta - May 24, 2022
0
BoStreet is a fashion forum for young consumers from India to constantly bring the latest country and fashion trends at affordable prices...