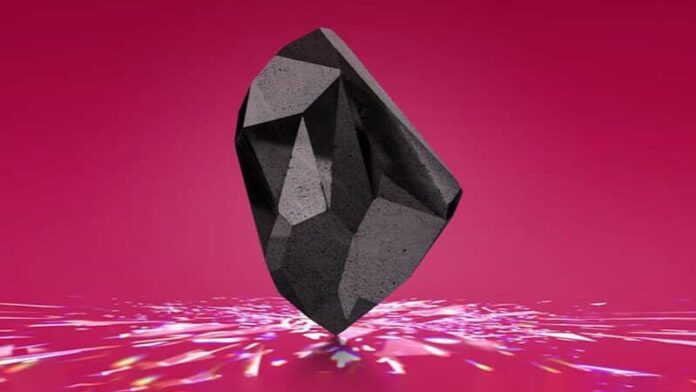 The rare gem, which is said to have emerged from space, was presented to media as part of a tour in Dubai and Los Angeles before it is auctioned off in London in February.

The diamond is expected to cost at least £5 million ($6.8 million) at Sotheby’s, the auction house also intends to accept cryptocurrency as a form of payment.

The auction house also revealed that The Key 10138 diamond, which was another rare gem and was purchased for a record price using cryptocurrency.

Sotheby’s is an American multinational corporation (MNC) found in the United Kingdom and headquartered in New York City.

It is a premier destination for auctions and private sales of Contemporary, Modern &Impressionist, Old Master Paintings, and more.

One of the world’s largest brokers of fine and decorative art, jewelry, and collectibles.

Sotheby’s said that it was featured in the “Guinness Book of World Records” in 2006 as the world’s largest cut diamond.

The auction house remarked that the diamond was created either by a meteoric impact or by a diamond-bearing asteroid colliding with Earth.

According to Sophie Stevens, a jewelry specialist at Sotheby’s Dubai told The Associated Press that the number five holds immense significance to the diamond, which also has 55 facets.

She explained that the diamond’s form is based on the Middle Eastern palm symbol of the Khamsa, which represents strength and protection.

Khamsa is an Arabic word that means “five”. “So, there’s a nice theme of the number five running throughout the diamond,” she further added.

They believe that the carbonado diamonds were formed through extraterrestrial origins.

With meteorites colliding with the Earth and either producing chemical vapor deposits or indeed coming from the meteorites themselves.

Carbonado, or black diamonds, are extremely rare and only found naturally in Brazil and Central Africa.

It is one of the toughest forms of natural diamond to work with, it’s a high-density polycrystalline diamond that’s impure, microporous, and made up of diamond, graphite, and amorphous carbon.

Minor crystalline precipitates fill the pores, and there are a few reduced metal inclusions here and there, and the diamonds are usually found in alluvial deposits.