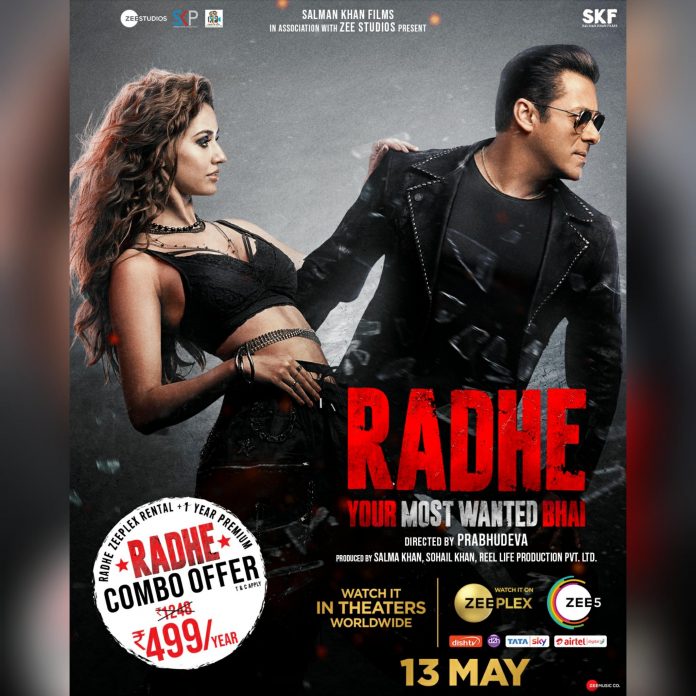 Salman Khan’s film “Radhe: Your Most Wanted Bhai” will be released on the ZEE5 platform. From world-famous brands like Cola, Elaichi, Pan Masala, shows like Big Boss now gets Salman Khan as their next hero.

ZEE5 is one of India’s largest digital video-on platform, has now announced the launch of the “Radhe Combo Offer”. “Radhe: Your Most Wanted Bhai” is a movie starred by Salman Khan. It is an action-drama film which is expected to be released on the 13th of May, on the occasion of ‘Eid’.

The directors and producers of this film have announced that this would be a multi-platform release across the world. The film will be available on the same day, same time in all open theatres as well as on ZEE platforms like ZEE5 and ZEEPlex where viewers can rent a movie and also have the choice to pay-per-view.

Mr Manish Kalra, the Chief Business Officer of ZEE5, India informed that the “Radhe Combo Offer”, is available for Rs.499/-. This 499 Radhe Combo Offer will let the consumers watch the movie starred by Salman Khan, “Radhe: Your Most Wanted Bhai” on ZEE5 with ZEEPlex, along with this the users also get access and the opportunity to watch ZEE5 originals, movies, Tv shows, Live TV, Zindagi TV Shows, ALTBalaji shows and all kids content with an Ad-free experience which lasts for one year.

Usually, this pack is priced for Rs. 1,248 which also includes ingressing up to three screens. ZEE have many competitors in the market, it includes Netflix’s monthly plan which ranges up to Rs.799/- and Disney + Hotstar yearly premium plan which is priced at Rs.1,499. Thus, by making ZEE’s plan available at Rs. 499 per year, they wanted to increase their number of trials. Mr Kalra also explains that “Irrespective of what others are charging, we wish to stay true, affordable to the Indian sensibilities and thereby target wider, audience especially the middle class and also a larger mass of Salman Khan fan base”.

As per the view of experts in the film industry, OTT platforms are a tool to acquire subscribers. The cost of acquisition earned per subscriber is around Rs. 250. To get theoretical releases, usually OTT players out around Rs 50 crore to Rs 100 Crore. ZEE5 already has signed 50+ theatricals across different languages. Along with that partnered with 40+original shows, 50+ news channels etc.

There are over 500 million 4G users in our country, this combo offer is mainly targeted at them and even subscriptions can come from anywhere across the world. ZEE5 will be using various tools such as printing, design, digital etc. to promote this Radhe Combo offer. Lockdown has brought a lot of users into the OTT platform, and each time when they wanted to watch something on the platform it increases the subscribers. The main challenge would be to make the new users to renew by paying the actual subscription fee.

Author - January 21, 2022
0
The company has a range of wide variety of products like audio gear, smart wearables, personal grooming products, and mobile accessories.