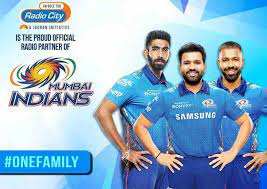 Radio City has declared its partnership with Mumbai Indians. This company has signed as one of the official partners of the IPL team. This is a moment of euphoria for Radio city. It also marks their decade-long association with the 5 times champions. This is their victory as India’s leading radio network. Their long-time efforts and sacrifice have finally come to an end. Radio City has proven that with patience and hard work, success can be achieved.

Radio City has boosted the Mumbai Indian’s campaign thought of ‘Yeh hai har Indian ki family” on-air, and also on digital. This campaign is supported by Radio City’s 11 markets in Maharashtra. The network is broadcasting airwaves. The only radio channel, which has a strong foundation in Maharashtra. The FM station has even uploaded a special show, titled ‘The Mumbai Indian Show’. In this show, RJ Shonali bestows us some striking news and trivia along with putting forward contests for Mumbai Indian fans.

Kartik Kalla, Chief Creative Officer, Radio City said “We all know how much Indians love cricket. It is more than just a game. It’s an emotion that binds everyone together. Playing Cricket is now, young generation’s hobbies and love. Many of us play cricket to feel free from worries, as it can keep our minds calm. Kartik Kalla is very happy to share with us their success story. This is Radio City’s 10th year of togetherness with one of the best T20 teams, Mumbai Indians.

Radio City has a strong bond with 11 cities of Maharashtra, which could ultimately help them to expand their Mumbai Indian Campaign thought with our listeners through well-known Rj’s. Radio City has become a precursor in sharing initiatives and provokes a sense of pride among their listeners. Our strong partnership with Mumbai Indians and they are like families now.

Mumbai Indian Spokesperson said “ Radio is a key platform for us to connect with fans. Through this, they could listen to their views on a first-person basis. In this era of increasing digital consumption of sports, we rely on radio offers of the multi-linguistic, and personalized voice for initiating communication with our followers. Our decade-long journey with Radio City has nothing, but a bag of experiences, and we entertain our partners in exploring the more productive way to reach our fans.

As part of this promotion, Radio City will be supporting their campaign through on-air and digital plat promos, TOH, sweepers, bumpers, capsules, Rj integration, digital integrations, and contests. With this bonding, the FM station persuades to unite all cricket fans and spread the spirit of cricket. During pandemic times, cricket acts as an escape from reality. This ongoing T20 cricket season has brought the whole nation to sit in front of the TV.

Devanshi Shah - May 2, 2021
0
Maruti Suzuki India Ltd(MSIL) announced on Wednesday that it will shut down its factories to make oxygen available for medical needs. As...