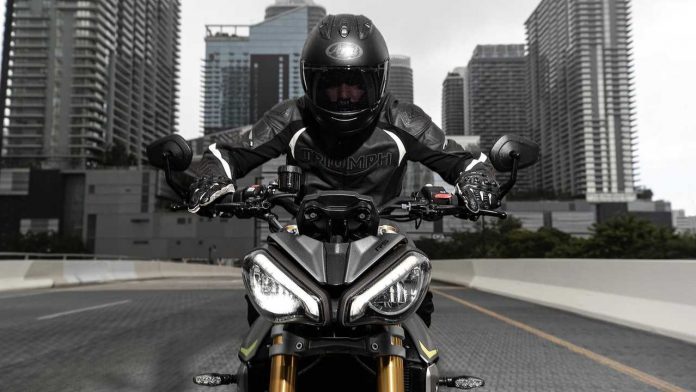 Triumph announced India’s prices for the brand new Speed Triple 1200 RS, officially opening its motorcycle bookings. The brand new Speed Triple RS was unveiled worldwide only yesterday and has been put on the fast-track for worldwide roll-outs. Triumph intends to have bikes in showrooms and ready for delivery by the end of February 2021, based on what we heard at the embargoed press briefing in the run-up to the launch. The Speed Triple 1200 RS for India will come from Triumph’s Thailand production facilities under the ASEAN corridor as a CBU.

With sharper lines and a more muscular design, the Speed Triple 1200 RS takes the signature silhouette of the Speed Triples to the next generation. Starting with the familiar cluster of bug-eyed LED headlights, now sharper and accentuated by the sharp LED DRLsWith new graphics running along the knee recess, the front mud-guard is carbon fiber and there are a new body-colored belly pan and a removable tail section over the seat of the pillion. The fuel tank is significantly more muscular than before. The new Speed Triple 1200 RS will be used for color themes. Sapphire black combines gray and red graphics with black body paint and a Matt Silver Ice that sets dark grey and neon green graphics against gray steel body paint.

The new Triumph Speed Triple now has a 1160cc triple-cylinder motor, moving up a whole segment from the 1050cc outgoing motorcycle, if the name had not already been given away. While the engine may share its genetics with the triple 1050cc that it substitutes, it is a new ground-up engine. The 2021 Speed Triple adds 30bhp and 8Nm of torque to the outputs of the previous generation, with a rated output of an incredible [email protected],750rpm and 125Nm of peak torque. Infused with Triumph Moto2 technology, Triumph also says that, thanks to a much flatter torque curve and a higher 11,500rpm redline, the new Speed Triple will have better power delivery. Triumph says the new stacked 6-speed has better packaging with reworked ratios, the motor is paired with a new 6-speed gearbox with a slip and support clutch.

The 2021 Speed Triple 1200 RS is based around an all-new chassis that, while being considerably lighter, consolidates the mass of the motorcycle better. For their motorcycles, Triumph uses high-quality equipment, and the Speed Triple 1200 RS is no exception. The 1200 RS is fitted with fully adjustable Ohlins suspension, Brembo Stylema calipers with a linked braking system, and Metzeler RaceTec RR tires, almost track-spec. The 1200 RS Speed Triple. A 6-axis IMU featuring a cornering ABS, wheelie control, and a switchable cornering traction control system is included in the onboard electronics suite.

Devanshi Shah - April 12, 2021
0
As India advances towards the post-pandemic world, the economic growth story is unfolding and getting stronger. This has led analysts at global...