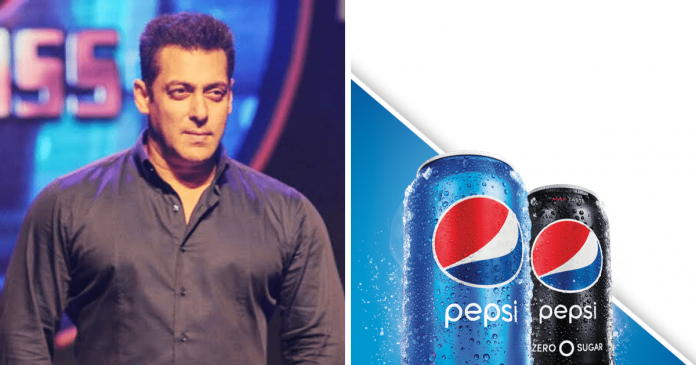 Pepsi (a carbonated soft drink manufactured by PepsiCo) was produced , developed ,and introduced to the world as Brad’s Drink, later the company renamed it Pepsi-Cola in 1898 and then shortened the name to Pepsi in the year 1961. The brand always believes that helping to create a healthier relationship between people and food means, the brand has been continuing to transform PepsiCo product offerings and increasing people’s access to more nutritious and healthy options.

The brand had been offering consumers a wide range and variety of beverages (including ‘No-Sugar’ variants such as Diet Pepsi, Pepsi Black, and reduced sugar variants). The snacking company, PepsiCo India, too had made significant progress with its popular variants of our snacks master brands including Lays and Kurkure. And Pepsi is always the brand’s one of the most popular drinks.

In the film, we can see that Bollywood actor Salman Khan remarks, “Sharma Bhi peeyega, Patel bhi peeyega… Aur Bhai Bhi peeyega,” and he pours a bottle of Pepsi into four glasses. The names which Salman Khan takes in the clip are the last names of Indian cricketers ( Sharma could be Mumbai Indian’s Rohit Sharma, Patel could be Delhi Capital’s, Axar Patel… ).

A PepsiCo India spokesperson commented that Pepsi had always innovated and communicated with its consumers through all those passion points that are relevant to them. Cricket is always being one of the key passion points for today’s Indian generation. PepsiCo India is delighted to celebrate India’s ardent love for cricket and the undying spirit of the cricket fan through the new film by urging every cricket lovers to drink Pepsi and enjoy the game with family and friends.

The clip is a continuation of the brand’s Har Ghoont Mein Swag campaign which was previously launched in March 2020 and the brand released its second ad at the start of the Dream11 IPL.  Pepsi had recently introduced its new 1.25-liter pack for Rs 50 during the Dream11 IPL which is enough for everyone.

Thus the brand urges everyone to enjoy, celebrate, and share, the energetic vibe of Cricket with your near and dear ones in this lockdown and of course, with PEPSI too !!!