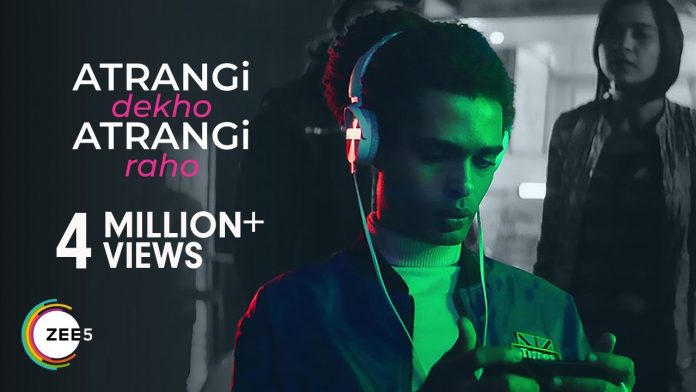 ZEE5 of ZEE Entertainment Enterprises has always attracted its customers and succeeded in having a long-term healthy relationship with them through their unique premium content library on offer across genres catering to diverse consumer taste clusters. With twelve navigational and featured languages, across lifestyle shows, children’s programs, exclusive short series, catch up TV of the online video streaming Over The Top (OTT) platform have always engaged its audiences. ZEE5 had achieved its aim of providing the audience user-friendly and comfortable experience with high speed and crystal-clear sounds.

Getting insights about the importance of keeping up the spirit of its diverse audiences, ZEE5 has announced the launch of its new campaign for the ZEE5 premium offering – “Atrangi Dekho. Atrangi Raho”. Atrangi celebrates the choices made by the audiences for their life and the contents they consume as part of the campaign. Personally, or professionally, content consumption plays a key role in every individual’s life is shaping up their identity. People’s choice of entertainment for themselves is been influenced by peers and family. The campaign gives the audience an insight into the changing world and how innovations are formed each minute. There is a big change from the concept ‘you are what you eat’ to ‘you are what you watch’. The world realized the importance of celebrating individuality and the changing mindsets which had further led to the vast spectrum of contents.

The senior vice president and head of ZEE5 Rahul Maroli responded to the launch of the campaign that India lives in their languages and ZEE5’s objective is to cater to all audiences with different languages and cultures. The campaign “Atrangi Dekho. Atrangi Raho” celebrates the eccentric identity of the individuals challenging the status quo. They are all set with their unique storytelling approach which is culturally driven to connect with their audiences. There will always be a certain consumer who is the influencer and pioneer, who is in search of unique concepts, Atrangi features, finds it and later followed by others. ZEE5 connects the customer through their Atrangi stories and motivates people to be an Atrangi by themselves. ZEE5 being a new age platform realizes the changing mindsets, new age audience’s attitude, and choices.

Passionate In Marketing - August 6, 2020
0
In Q2 2020, Smartphone market of India witnessed its worst performance. According to Canalys, the overall market declined by 48% during the period from...