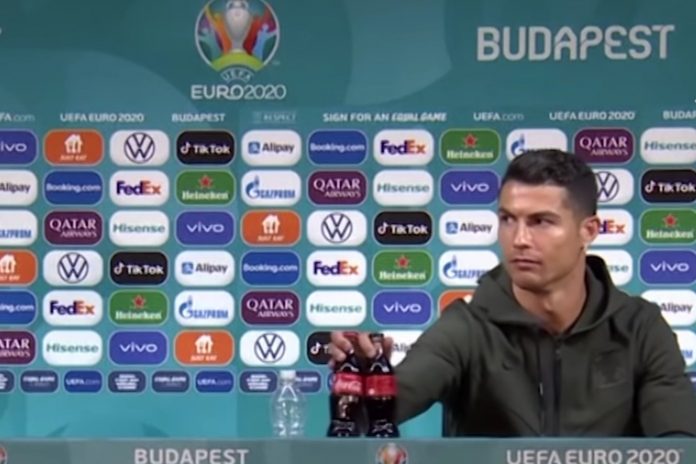 Coca-Cola grasps the tough path that actions speak louder than words. Just now, world-famous footballer Cristiano Ronaldo moved a couple of Coca-Cola bottles off from the desk before he sat down for a press conference.

The meet was after the UEFA Euro-2020 match between Hungary & Portugal. Ronaldo, who is the captain of Portugal’s national football team held up a bottle of water and mouthed the word ‘agua’, which is a Portuguese word for water.

A small clip of him doing the same at the press meet went viral and coincided with the $4 billion falls in the share price of the drinks giant. Based on the report by the Guardian, Coca-Cola’s share price dropped from $56.10 – $55.22 (that’s a 1.6% dip) almost fastly after Ronaldo’s gesture.

The market value of Coca-Cola gone down from $242 billion to $238 billion, a drop of $4 billion shortly after and the terms ‘Coke’ & ‘Coca-Cola’ were trending on social media.

Coca-Cola is one of the formal sponsors of the UEFA Euro- 2020 tournament. Hindustan Times reported that a Coca-Cola spokesperson responds to the incident, stating that  “Players are offered water, alongside Coca-Cola & Coca-Cola with Zero Sugar, on arrival at our press conferences.” The spokesperson included that people have different “needs & tastes”.

Likewise, on June 15, France’s midfielder Paul Pogba moved a bottle of Heineken (non-alcoholic) beer that had been placed in front of him at a Euro 2020 news conference. Pogba, a practicing Muslim (who turn to Islam in 2019), removed the bottle when he sat down to speak to the media after he was named “Man of the Match” in France’s 1-0 Group F win over Germany.

Coca-Cola is not unfamiliar to sports stars & controversies. In 2012- Brazilian footballer Ronaldinho saw himself in hot water, thanks to a can of Pepsi which was innocently sitting on the table in front of him. The Drum stated that he lost his £500,000 a year contract as a Coca-Cola ambassador after he was caught drinking Pepsi at the press meet.

American pop star Britney Spears also found herself at the same point. In 2001, she signed a multi-million endorsement agreement with soft drinks giant- Pepsi, but when she was photographed drinking competitor brand- Coca-Cola, the company was not happy. In 2002- Pepsi started to phase out Spears in favor of a new spokesperson, Beyoncé.

The marketing& advertising fraternity in India has its share of judgment on this incident. In a LinkedIn post Ogilvy’s senior creative director Nikhil Narayanan wrote that Ronaldo’s action had a clear message  ie; “You might be UEFA’s beverage partner, but you are not mine.”

Surya S - July 29, 2021
0
Assam Agriculture Minister Atul Bora said his department was working on various strategies at all levels of the fertilizer distribution network. We...