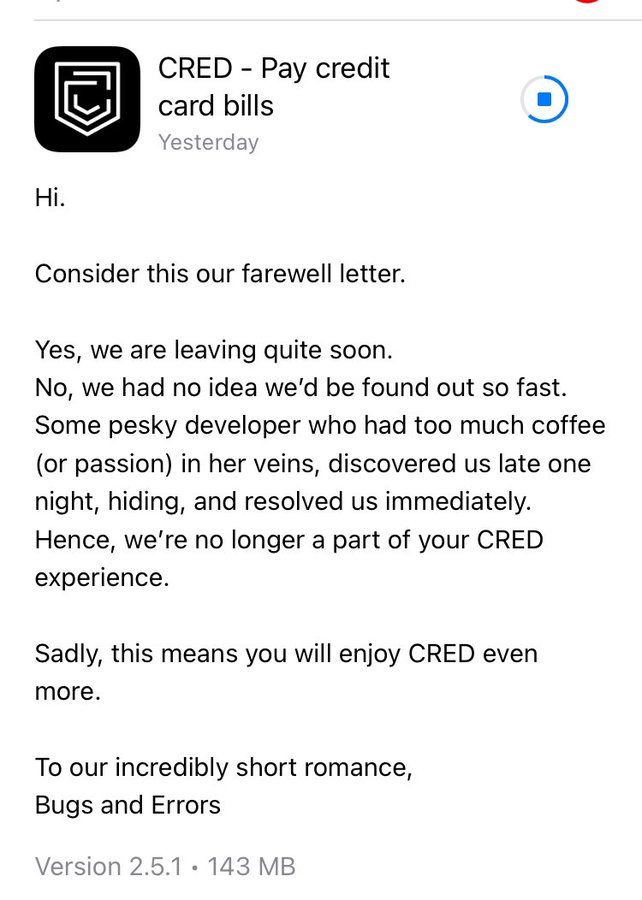 CRED, Pay credit card bills sent a farewell letter on behalf of bugs and errors to its users saying some pesky developer who had too much coffee in her veins, discovered them hiding and resolved them one late night.

It was quite shocking to everyone because usually, no company sent this type of message to its users, especially regarding their bugs and errors.

They started as “Consider this our farewell letter. Yes, we are leaving soon. No, we even had no idea we had been found out so fast. Some pesky developer who had too much coffee (or passion) in her veins discovered us late one night, hiding and resolved us immediately. Hence, we are no longer a part of your CRED experience.”
“Sadly, this means you will enjoy the CRED even more.” said proudly yet sarcastically.

“To our incredibility short romance, from bugs and errors.”
This hilarious scripted farewell message caught so many people’s attention some of its users had shared this message through Twitter said “After all those refreshing ads, now this farewell letter.”
With this message the app bid farewell to its incredibly short romance with the quickly unearthed bugs and errors in the letter.

Kailasnath HI - January 17, 2021
0
Everyone finally saying goodbye to the economic crisis in 2020, and has started to look forward to a new vision and goal...