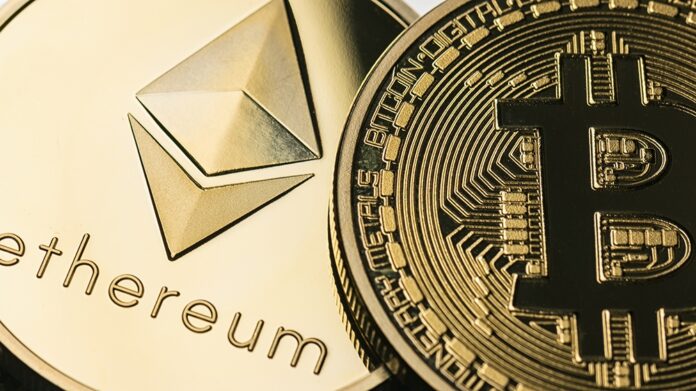 Ether, the Ethereum platform’s native cryptocurrency recently soared to new highs in terms of value. Ethereum now has a market capitalization of USD375.13 billion, up from USD22.9 billion last year. Ethereum and Bitcoin becoming the biggest players in the crypto market.

Bitcoin, launched in 2009 is still the world’s most common digital currency, with Ethereum coming in second. Over the years, Bitcoin has been the focus of attention and has retained its dominance over other digital currencies. Because of its peer-to-peer transaction capability, bitcoin became the most valuable digital currency since cryptocurrency and blockchain technology was implemented. Bitcoin can be transferred over the internet via a decentralized, transparent network, obviating the need for a centralized authority such as a bank.

Those who exchange this crypto through a distributed ledger system do not need to build confidence in each other for transactions to go smoothly. Another factor contributing to its success is the low risk of fraud, ease of use, and low transaction cost. Bitcoins have a market capitalization of more than USD1 trillion, and institutional investors are increasingly interested. Elon Musk’s Tesla recently invested USD1.5 billion in Bitcoin, causing its value to skyrocket.

Ether is the world’s second-largest cryptocurrency. Ether allows for smart contracts that are quicker, more resilient, and more efficient than those offered by other digital currencies. It also has Decentralized Finance (DeFi) features and high scalability, making it appealing to businesses. Because of the recent growth of Ethereum, Vitalik Buterin, its co-founder, has become the world’s youngest billionaire. Ethereum is a blockchain-based open-source framework that also helps developers to create applications using its programming languages.

What makes Ethereum different from Bitcoin is that, unlike Bitcoin’s peer-to-peer network, Ethereum allows users to pass and create Non-Fungible Tokens (NFT), which can be individually processed and transferred. Ethereum has a market capitalization of over USD397 billion and is widely used. Since the middle of last year, Ethereum has been flourishing.

The crypto market is still unpredictable, with prices and values fluctuating. As a result, it is often prudent to exercise caution while investing in cryptos, whether Bitcoin or Ether. Every day, however, a slew of new cryptos emerge. Bitcoin, Ethereum, Litecoin, Dogecoin, Ripple, and Zcash are some of the most well-known cryptocurrencies (XRP).

While blockchain was first associated with cryptocurrencies, it has since grown in scope. As a result, crypto use cases will continue to diversify, and the number of crypto assets and investments will increase. India recently passed a bill outlining the country’s cryptocurrency trading legislation. The country hasn’t outright outlawed cryptocurrencies, but it doesn’t work in favor of them either.