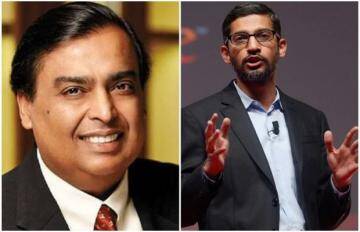 Google is proposing to buy a stake in Jio Platforms, the digital arm of Indian conglomerate Reliance Industries Ltd, as per a Bloomberg report. The deal worth $4 Billion, if finalized, will provide a stake of more than 6% in Jio’s unit to Google. As per sources, the discussions have reached the final stages and there could soon be an announcement regarding the same.

Mukesh Ambani’s Reliance Industries has recently witnessed major investments from the world’s biggest strategic and financial investors. Jio Platforms has sold 25% of its stake in 11 weeks. Some of the high profile investors include Silver lake, Qualcomm, Intel and Facebook and investments worth $15 billion have been raised in the recent months. The fundraising activity began in April, with a $5.7 Billion deal with Facebook for a 10% stake in Jio Platforms. The proceeds from the sale of stakes have helped the company become net debt free.

The recent deals are an attempt to transition Reliance Industries Ltd from the Energy Industry to the Digital Industry.

Reliance Industries has hired Morgan Stanley as the investment banker for handling the deal with Google.

The report comes a day after Alphabet’s Google declared that it intends to pump in $10 Billion (around 75,000 crores) in India over the next few years. The US based search–engine giant is aiming to consolidate its position in the evolving digital ecosystem of India. Named as the Digitisation fund, the amount will be set aside for investment into other companies as well as for Google’s operational expansion plans.  The investments will be in the form of equity investments in large companies, start-ups, partnerships along with operational, infrastructure and eco-system investments.

Google has recently partnered with Prasar Bharati to launch an edutainment series on Doordarshan and also with CBSE to train more than a million teachers across India to deliver blended learning through its tools like G Suite and Google classroom.   Jio Platforms has a vast user base, a strong local presence compared to its competitors and is actively transforming the digital ecosystem in India. While the Government’s recent move of banning several Chinese apps has created an opportunity for Google to expand and consolidate its position in the country.