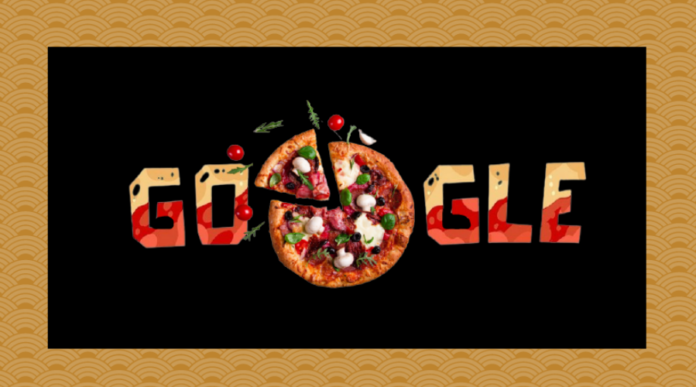 Google Doodle on December 6, 2021, celebrated Pizza Day to commemorate the day when Neapolitan Pizzaiuolo‘s culinary art was recorded on the UNESCO Representative List of the Intangible Cultural Heritage of Humanity.

Fourteen years ago, on this same day, December 6, 2007, UNESCO honored the culinary art of Neapolitan Pizzaiuolo.

Pizzas are one of the tasty and favorite dishes of the world. A recent report said that almost 5 billion pizzas are consumed internationally each year. It is as if the people of the US alone consume 350 pizza slices per second.

Google Doodle comes up with a mini pizza puzzle game to inform its users, the rich legacy and culinary craftsmanship in preparing pizzas.

The Pizza game can be played, from mobile phones, laptops, and PC by clicking on the Google logo on its homepage, which will invite you to the game.

The game is funny, informative, and exciting. The players are instructed to cut pizzas into different slices based on the pizza type ordered.

The game features the most popular pizzas toppings and flavors from across the globe. The list includes pizzas ranging from Margherita pizza to Dessert pizza.

Margherita pizza, as the name suggests, commemorates the Italian Queen Margherita. She was served with the most famous pizza, with the classic combination of three main ingredients- mozzarella, tomato sauce, and basil.

Pizza is the culinary artwork of the Neapolitan Pizzaiuolo. The term Pizzaiuolo denotes pizza maker & Neapolitan means a native of Naples.

Neapolitan Pizzaiuolo makes pizza, through a series of processes, like preparing the dough, baking it in a wooden-fire oven, and rotating the dough.

There are three main groups of bearers behind the traditional pizza-making process. They are the master Pizzaiuolo, the Pizzaiuolo, and the baker.

In the pizza game, players have to cut it by dragging the mouse from one end to another. Only three cuts per pizza are allowed.

The player will earn stars based on how accurately he cuts the pizza as per the required terms. When the players cross each level, the game becomes more complex.

Google Doodles presents such an amusing pizza game to make people aware of the cultural heritage of this Italian dish and the expansive range of pizzas available in the world today.