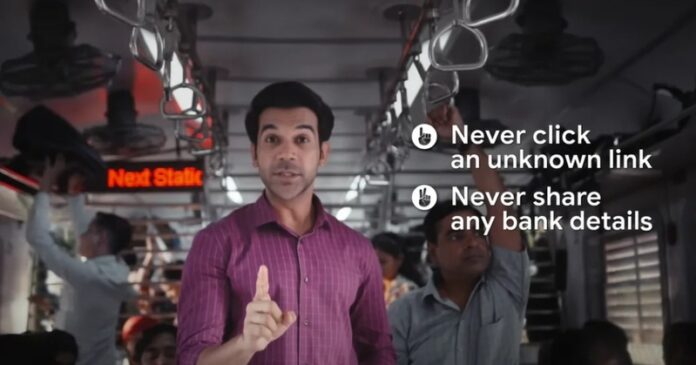 We all got such messages in our inboxes. The message seems too good to be true, but too good to miss. Despite the unreliable offers they promise, many people succumb to clicking on these links and becoming victims of financial fraud.

Google is raising awareness of this common threat with its latest Safer with Google campaign. In a series of his four ads, the tech giant urges users to follow his two steps “Raho Do Kadam Aagey.” First, never click on suspicious links, and second, never share your banking information.

Four ads show different ways scammers trick users with incredibly attractive offers. The ad also contains a call to action to opt-in to the Google Safety Center. An ad for actor Rajkummar Rao talking about ‘great deals’ on the internet.

also ran a Telugu ad starring actor Rana Dagvati. The ad shows how the scammer can assume the role of a government agency by creating a fake website of him to pay utility bills.

Google worked with the Ministry of Electronics and Information Technology (MEITY) to conduct a public interest campaign. The platform also launched an awareness campaign for safer internet use last year.

Lowe Lintas’ campaign was aimed at entrepreneurs and his SMB business owners who use Google tools to perform day-to-day business-related tasks. The ad highlighted how Google’s tools can help protect against fraud and phishing attacks, keep your privacy intact, and keep your business running smoothly.

Bhaskar announced the update on his LinkedIn profile, where his post read: Continue commuting between India and Singapore.