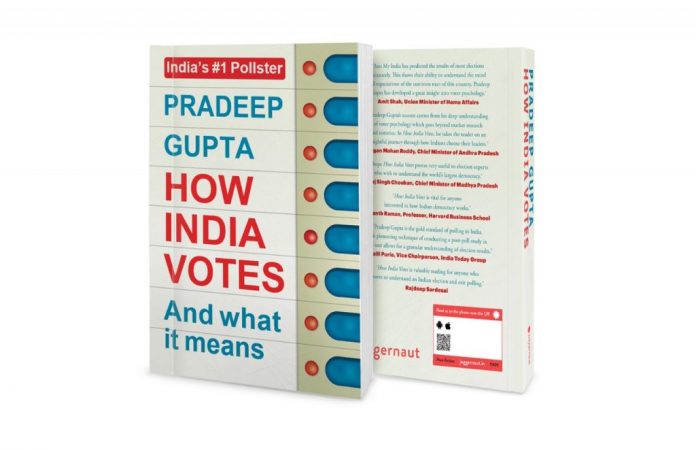 India’s leading psephologist and CMD of Axis My India, Pradeep Gupta, today announced the launch of his new book, ‘’ How India Votes: And What it Means. This book embellishes the nature of Indian elections and demonstrates how and why Indians choose their political leaders by revealing the harsh truth through interviews and analysis. How India votes: And What it Means is published by Juggernaut.

Gupta’s second book alludes us to the impact of polarization and GDP in election results, the role of smartphones in influencing Indian politics, the importance of women as a distinctive voting bloc in some states, and several other key factors. This book is intriguing, enjoyable, and informative. It has been highly appreciated by the stalwarts from the political, educational, and media ecosystem as it bestows a deep understanding of election results, the sentiments of the voters, and unravelling the challenges of the world’s biggest democracy.

The author of the book made a statement on the launch “Far too often, the dynamism surrounding Indian elections is not understood fully. Several observers, both in India and overseas, appreciate the elections in India. This book endeavours to decode the Indian electorate and ponder upon the mysteries in junta and exit polls. It illustrates various effects of political, economic, technological, and, social aspects on the common man and the consequences of their voting psychology. Gupta indicates that this book will be very informative and make us aware of the dynamics of the polling system.

Polling in India is perplexing and makes us fret. The leaders of the political party provoke us to vote for them through their appealing words. The campaigns and fake promises are misguiding us. Social media are also influencing us in choosing the political party. As the year passes, elections and polling are just for name’s sake as many big marketers are planning agendas behind this. They are easily convincing poor people by asking for our votes.

Political parties are just making us insane with their agendas and innovations. They are taking advantage of our Right to Vote and our human rights and dignity. They attempt to persuade us through their tags in posters. Polling in India, as the year passes, has to become a place of corruption and immoral practices. I was a proud Indian once, but now I am humiliated and exhausted with our polling.

Gupta and Axis My India are believed to have a gold standard for their exit poll analyses, since 2014 and, also have a reflection of their efforts in understanding voter psychology using their well-recognized election forecasting model. According to the Harvard Business School curriculum, they have conducted a case study on part of the HBS’s classroom course on elections. They portray the complexity associated with successfully predicting elections. Elections are conducted within various geographies, share borders with six nations, sprawling rural populations, and 23 different languages spoken across the country.