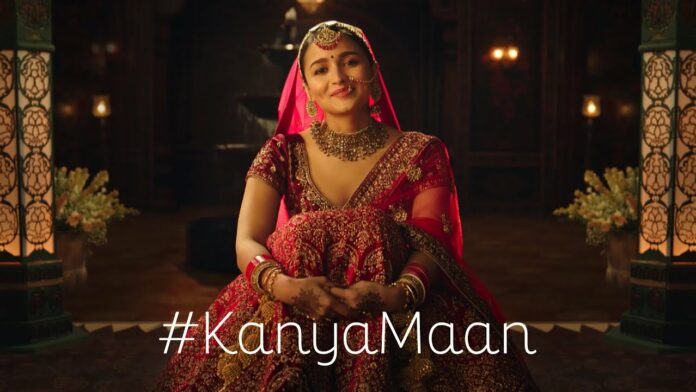 Manyavar, the go-to ethnic wear in the country, is facing serious allegations against their recent campaign. Manyavar has been famous for its traditional and up-to-date fashion trends. Their clothing line includes Indian wear for both Men and Women.

Manyavar is also famous for its collection for specific occasions, such as the Bridal collection, Sangeet, Mehendi, and more. Proving has Manyavar has got our back for every Indian festival and celebration.

They have received our trust and commitment throughout these years. Manyavar was founded in 1999 by Ravi Modi. Manyavar has seriously grown so much over the years. They have had the best of the best people to gain our confidence. They were credible, attractive, and effective communicators.

We have seen successful campaigns over the years which included Virat Kohli, Anushka Sharma.  Amitabh Bachchan, Ranveer Singh, Kartik Aryan, are many more of the brand ambassadors Manyavar has seen. It was the recent campaign ad of Mohey by Manayavar that is facing serious trouble.

The ad features Alia Bhat, as a traditional Hindu North Indian bride. She is seen observing and recollecting her favorite people’s opinions on her marriage. Alia points down how throughout the years she has been symbolized as a guest.

She explains how as a small girl, she was made to feel like she was a guest at her own home. She was made to realize that her home isn’t her real home. She is seen questioning the traditional Hindu ritual of Kanyadaan.

Kanyadaan is the ritual of a father giving away his most precious and beloved daughter. The ritual symbolizes the sacredness of  ‘daughters’. But the ad portrays the ritual as misogynistic where daughters are not a ‘thing’ to be given away.

The very essence of the ritual was misrepresented. Eventually, the ad displays the act of #KanyaMaan where the groom’s parents are seen giving away the son.

Social Media platforms are now observed boycotting the ad due to its poor acknowledgment of the traditional meaning behind rituals that are religiously followed throughout the years. The question arises if Mohey by Manyavar can overcome this hurdle.