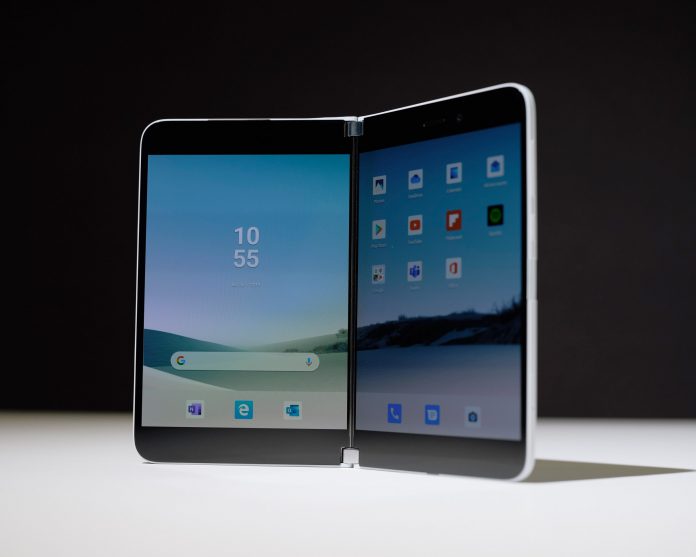 Microsoft ended the support for Windows Phone in July 2017 and in October of the same year they have stopped the active development on Windows 10 Mobile which contributed to the platform ‘s death. Microsoft is now ready to make its way back to the market with the Android platform.

Microsoft in its Latest blog announced that ‘Surface Duo’ will be launched globally at an initial price around ₹1,04,000 on 10 September. The device is Microsoft’s Android-powered dual-screen smartphone that was announced last year.

The Surface Duo, like the convertible laptops, has a 360-degree hinge which enables users to fold the device. Surface Duo devices have two different displays unlike the foldable phones from Samsung and Huawei. The device has two 5.6-inch OLED displays with aspect ratios of 4:3. Together they make a single 8.1-inch form factor with3:2 aspect ratio and 2700×1800 pixel resolution.

The design of the device is such that it operates like multiple screens as on Windows computers, by giving a PC like an experience despite being a mobile.

Snapdragon 855 is a high-performance 64-bit ARM LTE processor on a Qualcomm-designed chip and released in late 2018. Qualcomm released their new Snapdragon 865 chipset flagship as a sequel to the Snapdragon 855 smartphone device last year. Yet the system offering a year-old processor may be considered as a drawback.

The device comes with an 11-megapixel camera that supports 4K and HDR recording and electronic image stabilization.

They believe that if Microsoft can cope with the software features very well in its performance the one-year-old processor will not be a disappointment. The Android operating system itself has come a long way since Microsoft’s previous models and they believe to satisfy their customers.

Although Microsoft has been marketing the newest Surface-branded notebooks in India, it is uncertain when the Surface Duo will be launched in India. The target market of Microsoft, for this phone, remains business class and users of the enterprise.