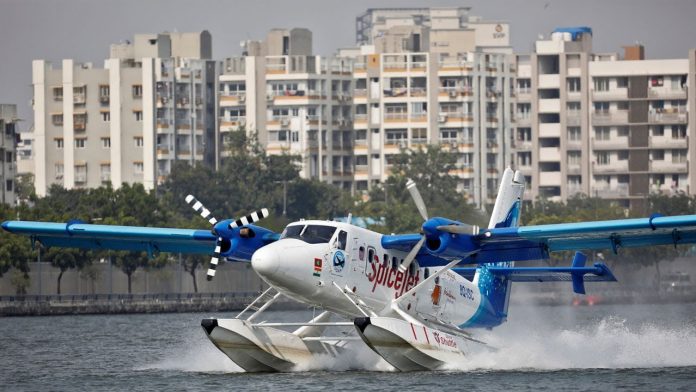 In India, more seaplane routes and water aerodromes are coming soon. Civil Aviation Minister Hardeep Singh Puri declared that entire of 28 seaplane routes, as well as 14 water aerodromes across the country with an estimated cost of 450cr. They are currently in different stages of development also.  The Ministry of Civil Aviation and the Ministry of Ports have signed a Memorandum of Understanding (MoU) on 15 June 2021, Shipping and Waterways to enlarge seaplane flight services in India. And it has expanded at a total cost of Rs 450 crore.

According to Civil Aviation Minister Hardeep Singh Puri, The MoU is an endorsement and the beginning of an institutional process to enlarge the seaplane services in India. And the minister elucidated that at the time of starting seaplane operations, he has never seen any difficulties coming his way from anywhere. Because of the huge prospect of seaplane routes. Then the Civil Aviation minister told his ministry’s officials to initiate them as soon as possible. And it has expanded at a total cost of Rs 450 crore.

At the event, the Civil Aviation Minister said that there are 28 seaplane routes under the regional connectivity scheme or Ude Desh ka Aam Naagrik (UDAN scheme) and 14 water aerodromes in the states of Gujarat, Telangana, Assam, Andhra Pradesh, Lakshadweep and Andaman and Nicobar islands. They are at different stages of development also.  Under the Modi government’s regional connectivity scheme- UDAN, the various financial incentives from both the state and central governments as well as airport operators are increased to selected airlines to motivate functions from unserved and underserved airports, as well as to retain airfares economically.

Prime Minister Narendra Modi initiated the SpiceJet airline’s seaplane service between the world’s tallest statue, the Statue of Unity near Kevadiya in the district of Narmada and Sabarmati riverfront in Ahmedabad, Gujarat on October 31 last year. But this seaplane service has not been working due to the COVID-19 pandemic for the last two months. It was said by the Union Minister of Ports, Shipping and Waterways, Mansukh Mandaviya who also attended the event of the MoU signing.

Akshara Byiju Sheeba - July 27, 2021
0
Subsidies under the PMAY program are adding to the post-pandemic surge in house purchasing sentiment. In light of competitive developer pricing and...