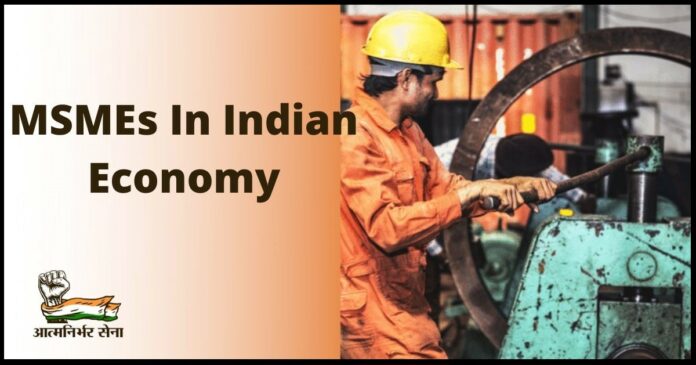 To gain a place in the global competitive economy, India needs the help of MSMEs.

India will have to focus on increasing exports in the highly demanding markets. Then opportunities will increase, there will be an upheaval and more fruitfulness.

One of the biggest supporters of India’s economic structure is micro, small, and medium enterprises (MSMEs); sector and progression without their participation will never happen.

There are more than 63 million MSMEs. 80 percent of the industries in India are MSMEs. 31 percent of GDP and 45 percent of exports come from them. Being a job provider to more than 120 million people, it is the second-largest employer in the country.

MSMEs can prosper if they incorporate with global value chains (GVCs) and perform as exporters and suppliers to large firms.

MEIS’s intention was to promote exports. However, small firms face a lot of challenges during globalization. The government also has to address such concerns.

Atmanirbhar Bharat is focusing on encouraging production in India and exporting it. Those firms that are selling only in domestic markets will not gain as much as those export.

To meet the exports’ requirements, firms will have to maximize the utilization of available resources and their capacity. Then only they can increase the total value of the business in the highly competitive market.

Elise’s Top MSME Ranking is one such that find India’s Top Exporter MSMEs. They reward those who have performed the best and have set a benchmark for others to follow.

Every year, they invite those firms who have met the qualifications of the government to be a Micro, small or medium enterprise and have showcased outstanding performance.

Since more and more numbers of MSMEs are entering into exports, we should find and reward the best performers. This will again increase the competitiveness and performance of others.