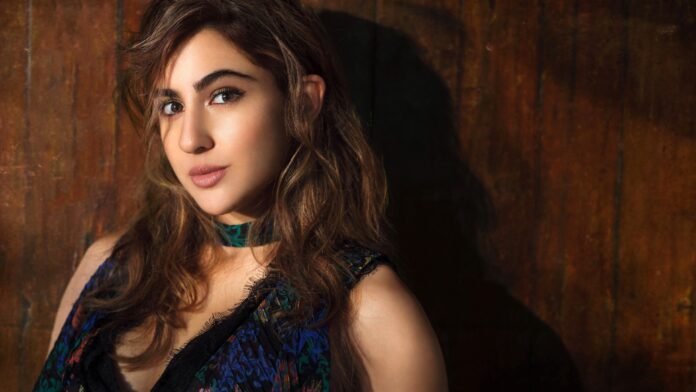 An outstanding Bollywood actor Sara Ali Khan, who cares for her fans on social media with incredible updates, on Thursday, shared a sneak peek of her dubbing session for her forthcoming movie “Atrangi Re”.

Sara Ali Khan took to her Instagram and posted a picture on her story from the dubbing studio, with the movie’s name on the screen and a mic in the front. The movie is directed by Anand L Rai, ‘Atrangi Re’ also features Akshay Kumar and Dhanush in lead roles.

The filming of the picture begun in December previous year. Back then, shots from the sets of the movie in Agra made a splash on the internet. They offered a peek into the world of ‘Atrangi Re’ with Akshay in the role of a king and Sara in a pink ethnic outfit.

‘Atrangi Re’ has been penned by Himanshu Sharma and the musical maestro AR Rahman has created the album for the movie with songs composed by Irshad Kamil.

Sara recently had left everybody influenced by wearing a saree at the Global Citizen concert. Cybercitizens were seen showering appreciation and affection for her on the social media platform.

Sara, who started her acting career with Abhishek Kapoor’s film ‘Kedarnath’ in 2018, has also starred in films like ‘Simmba’, ‘Love Aaj Kal 2’, and ‘Coolie No. 1’.

Sara wore an all-pink-coloured saree along with a bindi on her forehead. Sara talked about the reason for vaccination and advised people to inform the ones who are reluctant. She said that With all the suffering and hardships the Covid-19 has caused on the entire world, the actual truth is, it has gotten us together for a common motive.

This pandemic has proved to us that we are all vulnerable to these difficult times no matter where we come from. We must, thus, battle this virus together. Thanks to the scientists, we have a weapon to battle it, the vaccine.

There are still amongst us, people who have suspicions about the vaccine and are frightened of taking it. But she believes, we must inform and lead everyone. Whether it is via your social media accounts or directly in-person conversations, everyone must take an effective initiative, to speak about the advantages and needs of this vaccine. Because only then, can we begin to rebuild, reset and rejuvenate.

Actress Sara Ali Khan recently admired the movie Shiddat completely as she took to her social media account to applaud the lead actors Radhika Madan and Sunny Kaushal for their performances. Apart from this, Sara moreover inserted a gif and penned, “I cannot wait for all of you to encounter this magic”.

Sara shared a poster of the film and captioned, “@radhikamadan you’re encouraging, gorgeous, and soul-touching as usual!! @sunsunnykhez you’re beyond effortless, absolutely striking, and a real delight to watch! @maddockfilms @DineshVijan”

Passionate in Marketing - December 2, 2021
0
~This industry-first initiative is a one-of-a-kind disruption which will empower consumers with knowledge ~ Mumbai 1st December 2021: Trusted by...