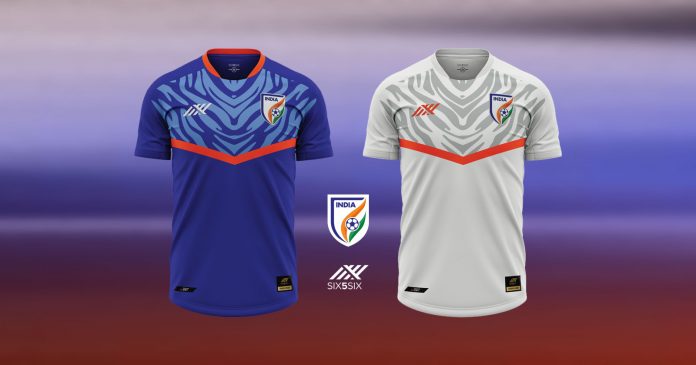 On Sunday (January 10, 2021), along with the All-India Football Federation (AIFF), the Delhi-based sportswear company SIX5SIX launched the latest Official Kit for the Indian Senior Men’s and Women’s as well as Men’s and Women’s Junior Football Teams. The brand-new kit, branded as the “Panthera Tigris,” will continue to feature tiger stripes, cementing the status of the “Blue Tigers” national team. In their original shape, the tiger stripes have been preserved and are positioned on the chest to symbolize dignity, bravery, and strength. Besides, the latest team uniform, including the jersey, tracksuits, and T-shirts, would pave the way for a new logo to be developed by the national teams in 2021. The items will be available for pre-order on the brand’s official website www.six5sixsport.com from 9 January onwards and will finally reach stores of sporting goods throughout India and the globe by March 2021.

In the brand-new styles that redefine match kits into a blend of both on-field success and off-the-field theme, Indian football enthusiasts will have the chance to see the Sunil Chhetri-led Indian Men’s Football Team along with the Ashalata Devi-led Indian Women’s Football Team. The All-India Football Federation’s General Secretary Mr. Kushal Das said that the unveiling of the new National Team kit is so symbolic that it takes place in the new year. At the senior level and age levels, both women’s and men’s, Panthera Tigris’ epitomizes the ethos of the Indian National Teams and never say die mentality. They thank their kit sponsors, Six5Six, for all their support and look forward to a fruitful friendship.

Avni and Ambar Aneja who are the Co-Founders of SIX5SIX said that with the unveiling of the 2021 kits, they are thrilled to write the next chapter in India’s football history. With the new design direction, the idea was to showcase Indian football’s evolution while remaining true to the blue tigers’ identity. A jersey is more than just a fabric-printed design – it represents a time, a place, and an emotion, and they hope they have captured it. They are looking forward to building an Indian football identity beyond the field, moving towards a cultural phenomenon.

Ashalata Devi who is the Indian Women’s Football Team Captain shared her excitement to don the new jersey by saying that wearing a new playing kit is always exciting and She must say the new design of their jersey looks fantastic. They can’t wait for all of them to step on the field with this new avatar. Hopefully, this new kit is going to be a lucky charm for them. In 2018, the Delhi-based sportswear brand SIX5SIX was signed by the AIFF as the Indian football team’s official kit sponsor and the association effectively started the 2019 AFC Asian Cup.