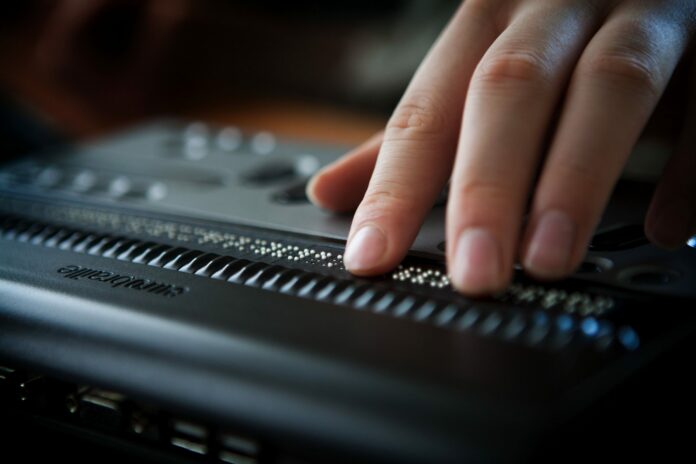 According to WHO, over a billion people around the world have some form of disabilities, so tech companies need to create their products with convenience features in mind. As recognition towards AT is growing, major technology firms and young startups are either creating special hardware products or incorporating software features designed for people with disabilities. Some of the best examples of assistive technology designed to address the daily barriers faced by people with disabilities are listed below

Xbox Adaptive controller The Xbox Adaptive Controller is created for gamers with disabilities. It looks like an old-school white box with a smaller steering button and two large black buttons that can be reprogrammed. It is a rectangular-shaped controller with dozens of jacks around the back that is used to connect several external mounts, switches, joysticks, and buttons. This Controller is wireless with a rechargeable battery that is built-in as well as it can also work with a wired USB connection. It can be used with Xbox One consoles and Windows 10 PCs and cost Rs 8539. In 2018 Time Magazine titled Microsoft’s Xbox Adaptive Controller as one of the best inventions.

Amazon Echo and smart speaker For a person with low vision, the Echo can perform fundamental calculations, read daily stories, set alarms and reminders, and perform a simple search and there is no need to move hands or change position.

AirPods into a Hearing Aid The AirPods are used as a replacement for a hearing aid. The “Live Listen” feature is designed to help people with hearing impairment. To use AirPods as a hearing aid change Settings on your iPhone to the active Control Centre.

Google Live Captioning Google Live Caption feature enables real-time captions for videos, podcasts, or voice notes on a phone. This feature is useful for individuals who are deaf or hard of hearing. When the Live Caption feature is on, it will detect audio playing on a phone and automatically starts captioning on the phone screen and supports up to 70 different primary languages. There needs an active internet connection to work. Live Caption is currently available on Google’s Pixel phones and select Android smartphones, including the Galaxy S20 lineup.

Be My Eye App Be My Eyes is a free app that connects blind and visually impaired people to sighted volunteers via a remote video connection that can help them in a variety of tasks. Created by Hans Jorgen Wiberg Denmark-based furniture maker, who is visually impaired, this app uses a phone camera by which the blind person connected to the volunteer, who can help them with any of the vision-related problems.

DotBook “DotBook” is India’s 1st Braille laptop for visually-impaired people that was developed by IIT-Delhi researchers. Instead of a screen of regular laptops, DotBook uses Braille, a tactile system of reading and writing for use by the blind or visually impaired.