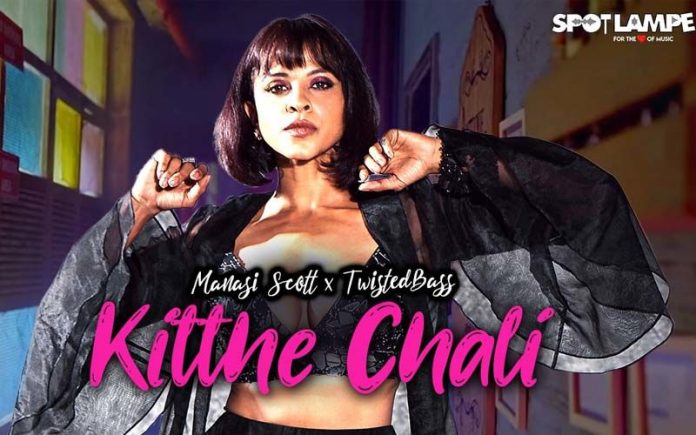 Bring back the electronic fire and dance of the golden years, indian music platform SpotlampE has presented a new single titled ‘Kitthe Chali’. An ode to old-school independent music, ‘Kitthe Chali’ is a Punjabi English mix by singer and the award winning performer- Manasi Scott in partnership with DJ TwistedBass. From 16th June, ‘Kitthe Chali’ will be accessible on SpotlampE. The music video will also air extensively on 9XM, 9X Tashan & 9X Jalwa.

Singer or songwriter & award-winning performer- Manasi Scott brings to life her Sardarni lineage with ‘Kitthe Chali’ – her first Punjabi English collaboration, with DJ Producer TwistedBass. The song is co-produced, composed, written, and sung by Manasi Scott & the rap lyrics are written by Luv O Trigger. The on fleek and chic music video is directed & choreographed by Ranju Varghese.

Manasi Scott is a Software Engineering topper-turned-singer or songwriter and live performer with over 3000 concerts under her belt. She is also one of the most loved voices on fashion show ramps for many major designers. Manasi is the only Indian singer to be on the cover of The Week & share the platform with Nick Jonas. Newly, she was bestowed with an award by the India Nightlife Conventions and Awards – INCA,  for doing over 179 back-to-back live concerts from home at the time of lockdown.

She is also a skilled actor with lots of films and web series online. She’s rocked Amazon Prime’s reality show The Remix & many web series like Baby Come Naa on Alt Balaji and Love Bytes 2 on Sony LIV.

Asked about the song Manasi Scott said that “I am really happy about this release. It’s my 1st ever original Punjabi song with some English mash up, of course as that’s who I have always been as artiste. Its old school, electronic & a song everyone can dance to. I loved collaborating with TwistedBass, and I know that this launch under the SpotlampE music label will reach every nook & cranny of our country and also the Indian Diaspora across world-wide. This was my lockdown creation- an independent music, ode to old-school, bringing back the dance & electronic fire of the golden years.

Passionate in Marketing - September 29, 2022
0
Visakhapatnam: 29th September, 2022: Gangavaram Port, the deepest and the most modern port in the country celebrated ‘World Maritime Day’ at the...

Lifestyle’s new festive campaign inspires one to groove in style!