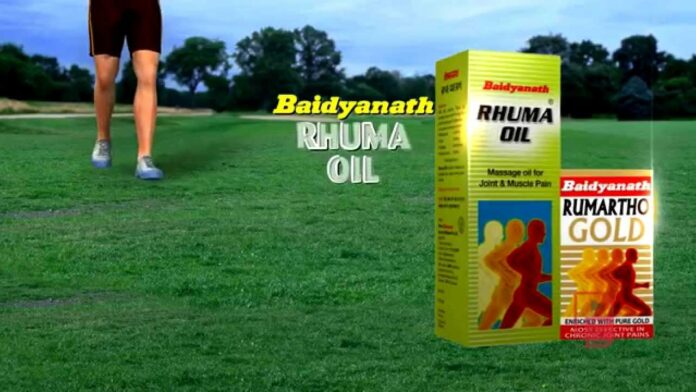 Baidyanath is a leading ayurvedic pharmaceutical company that has made promising statements about a muscle pain-relief oil. It has recently launched a product called Rhuma Oil.

The company launched a campaign for its product under the pain category. The company, along with Thinkstr, created a film ad for the Rhuma Oil product.

Ajay Sharma, who is the director of the pharmaceutical company, stated that Ayurveda is well-known among everyone in India. The entire population knows what effects Ayurveda can give. It is the most effective remedy against any kind of ailment.

He also stated that upon seeing the response of the public towards the medicine, they thought it was apt to show the benefits of a pain management medicine under Ayurveda. Muscle pain is an issue that most people encounter.

Present India moves at a very fast pace which naturally increases the stress on all individuals. This will lead to muscle pain, joint pain and back pain. Not just working individuals but also the elderly population who face these issues regularly.

The company expressed that their motive was to make these people feel that they don’t have to suffer these issues forever.

The CMO of Baidyanath, Ramesh Yadav, states that the ad campaign approaches the concept of pain management with a touch of light humour. He says that it will help people approach the product with a bit of confidence and ease.

The founder of Thinkstr, Satbir Singh, expressed that the idea of the ad film was to create something that sticks to the mind of the people. For that, the ad needed to be memorable. Putting in that touch of light-hearted humour would encourage people to be interested.

The company explains that Rhuma Oil is specially made and blended with natural herbs that are effective and produce long-lasting relief from pain. It would also give the customers significant relief.

As pain can interrupt the person from working or any other duty, the pain relief oil will help get rid of the pain and help continue the daily work and errands.