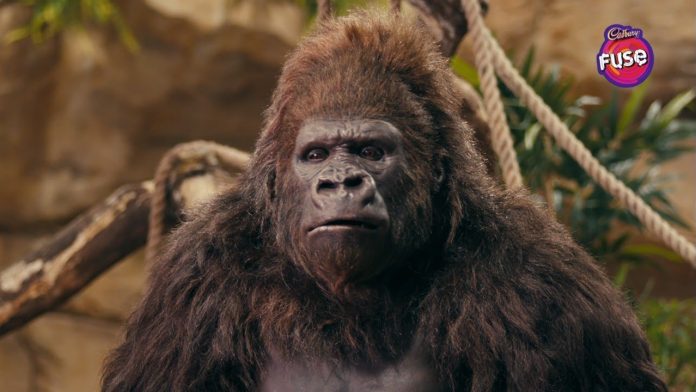 Cadbury Fuse’s new ad comes with a message to not feed animals in the zoo. Feeding animals in the zoo is something that is not allowed but some of the visitors are not sharp to get this critical message and continue to feed the animals with the food they are bringing with them.

In the new ad of the Cadbury fuse ad, we can also see the return of the famous ‘Gorilla’.In the current advertisement by Cadbury Fuse they show a guy tempting a gorilla inside a zoo with a Cadbury Fuse even after receiving instructions to not feed animals. At the same time, they are showing a hungry woman and who wants something to eat. On seeing the man with the chocolate the woman jumps and snatch the chocolate from the man and eats it. The ad also shows “Gorilla v/s Woman”, “Who will win?” The ad ends with showing “When your hunger goes out of control.” By this Cadbury is trying to show that if you have uncontrolled hunger don’t wait but go and grab a Fuse. This message is very similar to the most famous Snickers caption ‘You’re Not You When You Are Hungry’. A person who is not in control of their hunger is a very famous ad that snickers introduced a few years ago.

Talking more about the return of gorilla, first, it showed the appearance in the 2007 campaign “Glass and a Half Full”. This is a nearly one-minute ad that shows the Gorilla enjoying music and playing drums to the same music. The audience seemed to enjoy this concept and this ad also won various awards. After introducing their ad with this Gorilla, Cadbury was able to see a sales boost of 12% and even the ad recall among the audience was also high. About 76% remember the Gorilla ad and that it’s an ad for Cadbury. This might be the reason for bringing the ‘Gorilla’ back again.

The main purpose of any ad is brand recall among its target audience. With the return of Gorilla let’s hope that the ad leaves an everlasting impression on the audience.