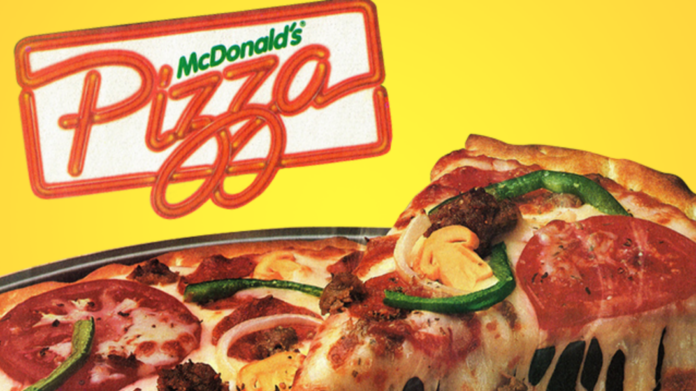 Take one of the world’s most popular food and combine that with the world’s most successful fast-food chain, and what’s the result? The perfection of a formula so divine that would have existed today but faded away like there’s no tomorrow: McDonald’s Pizza.

McDonald’s spent almost a decade contemplating the pizza idea, and they attempted to reign the fast-food world. Maybe in recent times, McDonald’s has been off a bit, but they were untouched by their competitors in the 80s. They owned almost 40% of the entire $48 billion fast-food burger market and generated double the profits.

Over the years, they have worked with hot dogs, spaghetti and meatballs, lobster, burgers with pineapple, and the most popular McRib. That excludes products like shrimp, noodles and mashed potato burgers served in China.

If McDonald’s had gathered an abundance of experience in all these items, why not pizza in all these years? Pizza was on their to-do list, but apparently, there were many logistical aspects to figure out. Also, serving pizza was on the list was because pizza parlors like Pizza Hut were rapidly growing, and this was pressuring McDonald’s to speed up the process.

Yes, it was called the McPizza. However, there was no intent to call it that, but the industry insiders linked it with that name. McDonald’s had this as the temporary name, but they scrapped it in the early 80s.

Their goal was to capture the dinnertime audience because everyone had pizza for dinner since burgers were a lunch choice for many. McDonald’s also wanted to take over the entire fast-food industry with their pizza.

They started working on their pizza in 1986, and they innovated a quick-cook design that utilized super-heated air. That could transform a lump of frozen dough into a crispy crust in six minutes.

Time: that was the issue with McDonald’s pizza. The reason fast-food chains began was to get food as soon as possible, but the pizza takes a long time. The whole process took about 11 minutes and depending on the restaurant’s busyness it could take longer. 11 minutes might not sound like a huge amount of time, but it is duration too costly for fast-food chains.

The cost of it was also a caveat. The pizzas ranged from $5.99 to $8.99, which could be almost $12-18 today. That was expensive for a mediocre pizza. There were many places like Pizza Hut where the pizza was not only lifetime better than McDonald’s, but miles cheaper.

Towards the end of the 1990s, McDonald’s pizzas were no more.

Amitha S - August 8, 2022
0
Internet domain names are no lanky as expensive as they used to be. They are even more affordable than buying a meal....