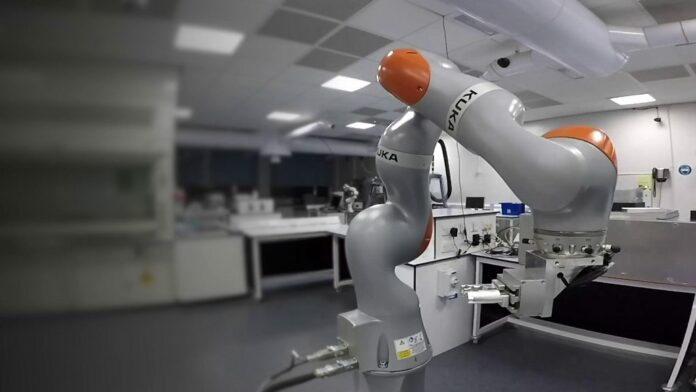 Technology is basically powered by Artificial Intelligence. Artificial Intelligence is exactly what we see in the movies; the robots that follow each and every order you give them. Intelligent and Smart devices are present everywhere around us. Even the platform you are reading this article is supported by AI. The use of algorithmic programs to run our commands have become the new normal. If you need to make an order on Amazon, give Alexa the specifics, and consider the job done.

But AI is not just an individual assistant; it has the capability to run a whole factory given that the programs and commands are set right to perform the assigned tasks. Business and small-scales centers are facing a crisis occurring once in a lifetime. The use of AI and automated machines are gaining relevance now.

A lab has decided to use robots to perform tedious tasks for the scientists non-stop. It does all those works that require extensive time and effort, making it easier for scientist to concentrate on other activities. The robot was developed by the University of Liverpool. The automation of recurrent activities ensures that the chances of error are less than a percent. So, scientists are able to endorse their experiments in the belief that the chemicals and elements used are generated by AI which is subjected to unbiased outcomes.

The robot can change up to 10 variables, run the tests, and collect the results. Developer Andy Cooper is hoping to commercialize the robot for other labs or even companies that require running extreme tasks without the time and good human effort being wasted. He aims at creating specialized ones for each requirement that he receives. The same robot cannot serve the exact same need, so its algorithm must be altered and must be able to conduct the commands of the company/lab it is employed to. Each robot is aimed to perform not just a single task but a variety of tasks. In this way, the user can avoid the extra costs in human and outdated machines.

If a single machine can do the job, then it is worth it.