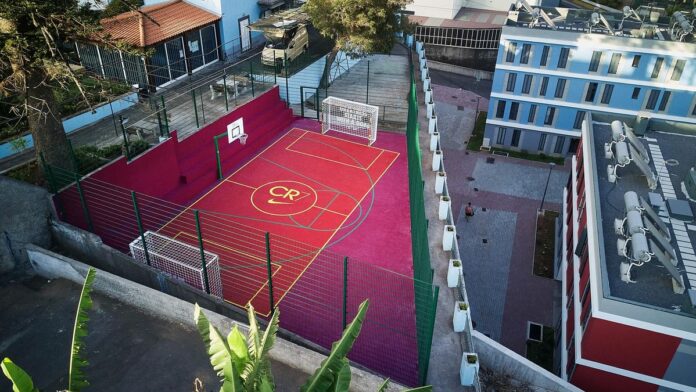 Nike has moved quickly to celebrate Cristiano Ronaldo becoming the all-time leading goalscorer in men’s international football by exposing a customized CR7 pitch in Madeira. Also, a new special edition Mercurial Superfly is launched for none other than the Manchester United frontman.

Portugal’s Ronaldo broke the record on Thursday, 2nd September in a generally dramatic manner with the latest of late braces. He converted a defeat into victory as he carried Portugal to a 2-1 win over the Republic of Ireland. He surpassed Iran’s Ali Daei with his 110th goal. As soon as the full-time whistle blew Nike announced a refurbished pitch in the Quinta Falcão community center in Madeira to label where Cristiano Ronaldo spent his early childhood.

The football pitch is set at the local community center where Ronaldo spent his early years of childhood. It consists of a painted goal post that has a special meaning for Ronaldo: his commitment to scoring personal goals on his way in order to become one of the greatest footballers in the world.

Nike, as we know is the leading US sportswear brand that sponsors many high-profile athletes and sports teams around the globe. As Ronaldo is one of its endorsements, they refurbished a pitch where he spent some of his childhood in the Funchal community of Madeira, Portugal. The pitch is set at the local community center, the crossbars of the goals give a nostalgic illustrated timeline of Ronaldo in not more than 15 scenes.

It is designed specially by Portuguese artist Pedro Campiche also known as AkaCorleone. The scenes portray the places that shaped him, the in-game moments that eternalized him, and the awards that keep stacking up said Nike on its website.

It’s not over yet. Nike also launched a brand new pair of commemorative CR110 boots because of Ronaldo’s influence among his peers. It is given to 110 rising stars in the primary countries where Ronaldo has played: Portugal, Italy, Spain, England shoe’s design indicates his record-breaking spree.

The shattered multicolor print is a visual representation of breaking records. The rich burgundy on the outer side with crazy gold detailing and speckly laces looks amazing. It also has a graphic representation of the date June 6, 2004, and the minute 90 + 3 when Ronaldo scored his debut professional goal for Portugal.

Wieden+Kennedy, the popular advertising and brand marketing company is behind the entire campaign. It includes a short film, where various footballers are giving their voice-overs about Ronaldo’s passion, sports ethic, and how he dominates in his games.

Passionate in Marketing - August 12, 2022
0
Through this campaign, Tiki aims to rekindle love, pride, and devotion for Tiranga through its creator community New Delhi,...