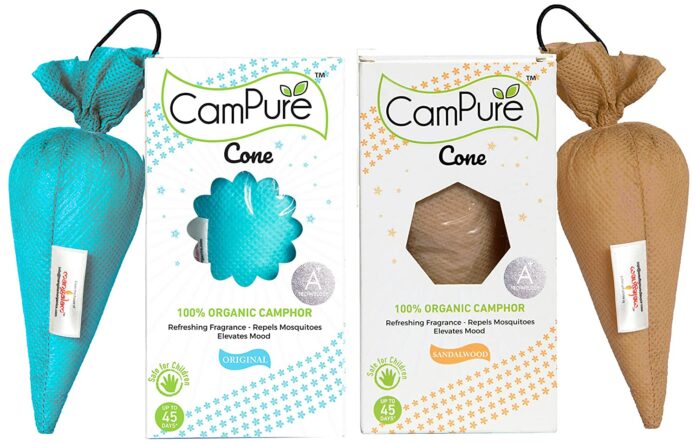 There are various methods and types of air fresheners in the market. It’s full of them.

Some air fresheners contain harmful chemicals that trigger allergy and asthma symptoms or are toxic. Air freshening should not only be limited to modern-day sprays, air freshening also involves the use of organic and everyday home items. Though air fresheners are mainly used for smell removal, some people use air fresheners for the pleasant smells they exhale.

India’s largest producer of Camphor, Mangalam Organics under its brand CamPure has started a restoration campaign “Phool ya Fool?” comprising one 25- seconder film with famous Maharashtrian Actress, Girija Oak. The aim of this campaign is to spread awareness that almost all air fresheners are comprised of chemicals which consumers must shift to pure options like CamPure Cone.

The film shows that how consumers are fooled by most air fresheners by showing flowers in their advertisements and packaging but what they really have is a “chemical waali” fragrance. The film then unveils an organic alternative, a camphor-based 100% Organic CamPure Cone by visually demonstrating the origins of the merchandise in nature and the way it’s uniquely formed into a round shape.

Pannkaj Dujodwala, manager of Mangalam Organics, further adds, “The goodness of camphor are some things we’ve known of for hundreds of years, and its usage extends far beyond our prayer rooms. Over the years we’ve heard from many of those who choose camphor as an organic and safe alternative to regular air fresheners. Inspired by such stories we’ve got introduced to the CamPure Cone and our aim is to extend the notice of organic fresheners through our messages”.

The film has been conceptualized and produced by Trinity Films. Harish Tripathi, the co-founder of Trinity Films, further adds, “It was a pleasure engaged on a product that we believe can bring a real change within the consumer’s lifestyle. Our research indicated that individuals are unaware of the harmful chemicals released by most air fresheners. This campaign for CamPure Cone aims to speak the truth in a simple yet entertaining way and presents an environmentally-conscious option, bringing us all closer to a healthier lifestyle.”