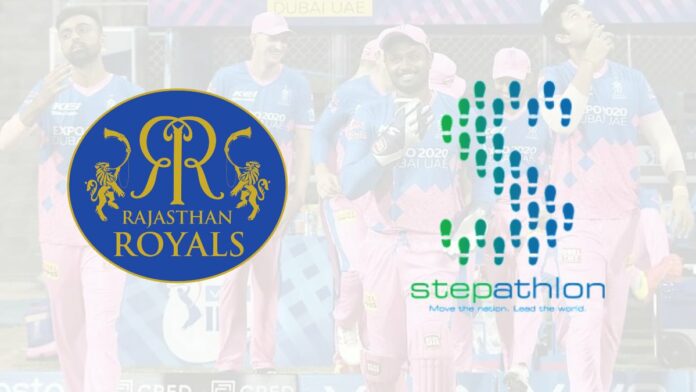 The first Indian Premier League (IPL) champions, Rajasthan Royals, join hands with the participation of award-winning fans around the world and Stepathlon health products. The initiative will focus on engaging the Royals community in depth and helping existing fans stay in touch with the Club.

The unique initiative to engage fans will focus on engaging the Royals community deeply and help existing fans stay in touch with the Club while also increasing Royals fans and bringing value to Rajasthan Royals participants. Further details of the event, including dates, will be announced soon.

Speaking about the partnership, Manoj Badale, Lead Owner of Rajasthan Royals said, “We hope that this unique initiative with Stepathlon, will help us to connect more closely with our fans and grow the ‘Royals’ community around the world”.

The Rajasthan Royals are part of the Royals Sports Group, which also operates with the Barbados Royals in the Caribbean Premier League.

The Stepathlon format aims to break the cycle of sedentary behavior and help people understand and manage their health and well-being, by rewarding them for achieving their health goals.

The race has brought over 16 million impressions, 25,000 pieces of user-generated content and positive results for participants who build healthy habits and 78% of participants lose weight.

In addition, Mike Fordham, CEO of Royals Sports Group, said, “We are excited to work with Stepathlon to bring us closer to our fans and bring benefits to our business partners and other stakeholders so that we can drive domestic revenue and transboundary spending through many channels ”.

“Personally, and professionally, I am happy with this partnership. Continuous fan engagement is a sacred source of Sport and Recreation, and we are pleased that Stepathlon brings deep and meaningful fan engagement while creating a healthier, more enjoyable, and more productive planet,” said Ravi Krishnan, Chairman, and founder, Stepathlon.

Ravi Krishnan is a key figure in the sports, entertainment, and media business in India. According to Business World, he has been a pioneer in India’s sports management business, which helped the international sports team IMG find a foundation in the country in 1995. As Deputy Chairman, Ravi also played an important strategic role with Rajasthan Royals, the 2008 IPL champions.