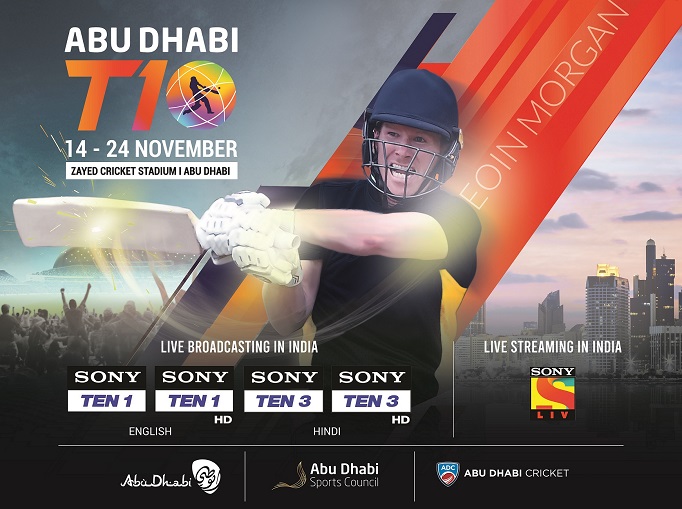 As the official broadcast partner for the second edition of Abu Dhabi T10, Sony Pictures Networks India (SPN) has returned and enhanced their commitment to take the special cricket extravaganza to their viewers in the Indian Subcontinent. The tournament is set to take place from January 28 to February 6, 2021, at the Sheikh Zayed Stadium.

Abu Dhabi T10, formally recognized by the International Cricket Council (ICC) and sanctioned by the Emirates Cricket Board, is the world’s first ten-over cricket tournament (ECB). It is the first-ever globally accepted ten-over style competition. The Abu Dhabi T10 is a UAE commodity that has developed into a cricket format that has been embraced globally. Matches have a 10-over-a-side configuration with a total of 90 minutes of play for a length of 45 minutes per side. With a round-robin followed by semi-finals and the final, the tournament is played over ten days. A fast, high-energy format, the Abu Dhabi T10 tournament is enjoyed by global viewers and international cricket stars alike.

Sony Sports has unveiled the promotion “Cricket Ka Naya Avatar- Tod Phod Cricket” to drum up the hype for the action-packed nature of the Abu Dhabi T10 competition, where the whole game is Powerplay and fans can look forward to 10 overs of power-packed entertainment at its finest.

Sony Pictures Networks India brings broadcast experience and solid credentials to its portion of the transaction, in addition to its large user base. With rights to four international cricket boards – England and Wales Cricket Board, Cricket Australia, Sri Lanka Cricket, and Cricket Ireland, the network is India’s premier cricket destination. The broadcaster is also the official broadcaster for Australia’s current India tour and the Big Bash League.

Cricket has always been the passion of India and we are delighted to partner once again in the Abu Dhabi T10 with this groundbreaking, fast-paced format. Abu Dhabi T10 has grown from strength to strength & lovers of cricket can look forward to some of the biggest names in this season’s game delivering strong results-Rajesh Kaul, Distribution, and Head – Sports Business, Sony Pictures Networks India

Ananthu B S - March 1, 2021
0
As per estimates dating from January 2021, the Japanese government and different elements engaged with facilitating the Tokyo 2020 Summer Olympic Games...