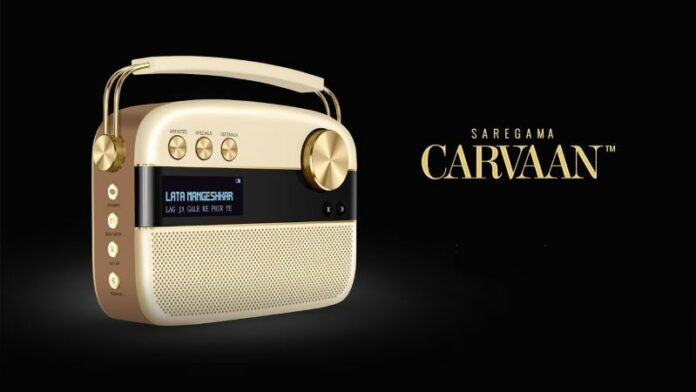 A feature phone from Saregama has been released and comes pre-loaded with 1,500 songs. The cost of the most recent version of Carvaan is Rs 2,499.

The RP-Sanjiv Goenka Group company Saregama has unveiled its newest product at a time when consumers are transitioning from feature phones to smartphones. It is a ‘Mobile Carvaan’ feature phone. The gadget includes a digital camera, a 2500 mAh battery, 1,500 pre-loaded timeless Hindi tunes, strong speakers, and an FM radio.

In 2017, Saregama unveiled its first Carvaan product, a portable digital music player with built-in stereo speakers and 5,000 timeless Hindi tunes. In the past, Saregama made an effort to provide an easy-to-understand Vividh Bharti music listening experience for the senior population. Saregama has introduced several goods under the Carvaan brand since 2017 to meet evolving consumer demands and technological requirements.

Even in the era of online music services and OTT audio apps, Saregama’s extensive music collection remains a standout feature of its Carvaan portfolio and continues to appeal to its target audience. Will the deteriorating feature phone market in India be a problem for Saregama’s newest product?

Saregama’s MD Vikram Mehra said, “In our company, anthropology wins over technology, any day,” in an interview with afaqs! in 2020. We conduct in-depth consumer research on both customers who have already purchased from us and those who are considering doing so.

The majority of Carvaan products have traditionally been primarily aimed at consumers aged 40 and up. When it comes to their entertainment experiences, this age group favors ease over control. This specific age group has been taken into consideration when designing the Carvaan devices.

According to Prabhu Ram, head of the Industry Intelligence Group at CyberMedia Research (CMR), Saregama now offers an alluring offering for customers in aspirational India with Mobile Carvaan.

Due to the COVID outbreak, Indians have spent a lot of time indoors during the past two years. According to Ram, as screen time has expanded, customers’ need for companion devices to listen to music has grown.

In contrast to other feature phones on the market, Singh believes that the cost of the Mobile Carvaan is a little on the expensive side. Starting at around Rs 1,100, feature phones from manufacturers like Nokia, Jio, and Lava are affordable.

The key customers of Carvaan Mobile might still not feel secure enough to purchase it from e-commerce sites like Amazon or Flipkart.

Its dissemination, according to Ghosal, will also be difficult. “This product will need to penetrate even deeper,” said a representative of Saregama, “whereas Saregama’s earlier products mostly focused on selling through Croma and Reliance and gradually made their way down to smaller retail outlets.”

Vinaykumar Swami - August 14, 2022
0
NIC Honestly Natural Ice Cream, the fastest growing ice cream brand in the country after establishing itself as one of the most...