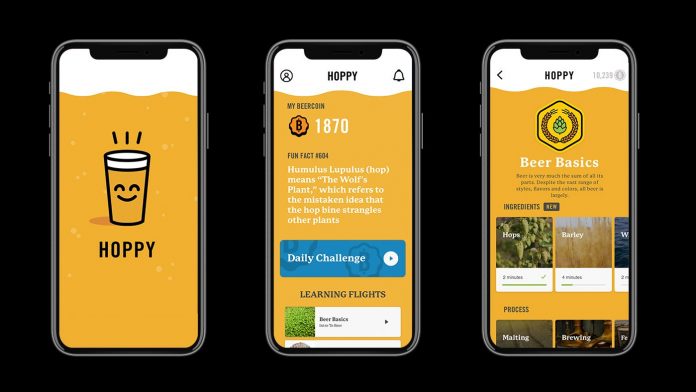 The app which initially started out as a tool, to help employees to understand better about beer and also aim is to educate the public that beer is not ‘ simple’.

AB Inbev, the brewing giant, owns brands such as Budweiser, Corona and Beck’s. AB Inbev has launched an app to get consumers and staff to engage more with the beer.

The consumers to navigate the extensively diverse range of beverages available. It allows users to complete quizzes, collect badges and earn “ beer coins”, and compete for occupying a place on a leader board.

The idea was initiated as a collaboration between the marketing and HR team lead by  Charles Nouwen, AB Inbev’s global head of passion for beer.

A company survey found that while 95% of employees in the head office wanted to be ambassadors of the company and the brands felt they lacked the knowledge and resources.

Nouwen and HR figured out and came up with the best approach, “jump on board”.

Hoppy has multiple functions but mainly works by helping consumers learn some facts about beer like the type of glassware that should be used or about the different types of brews. Users can take quizzes to test what they have learned and create teams and leader boards to compete against others.

It was vital the interface used is ‘playful’ to make sure people would be interested to learn from Hoppy rather than browsing about it from the web.

Nouwen says, “ Even if cool content is produced, it will work. When the consumers are done with work using an app, which feels like work could be something that the people might want to do but they won’t actually do.

1600 plus AB Inbev employees are already using Hoppy. Although initially it was meant to be an internal tool, its success led Nouwen to the idea of launching the app externally.

The plan to launch the app to consumers was brought forward in the month of March when the Covid-19 pandemic began to start. AB Inbev brought together a team to build a website for the app so that, people can use it on their PCs and smartphones. Both their website and the apps are now live.