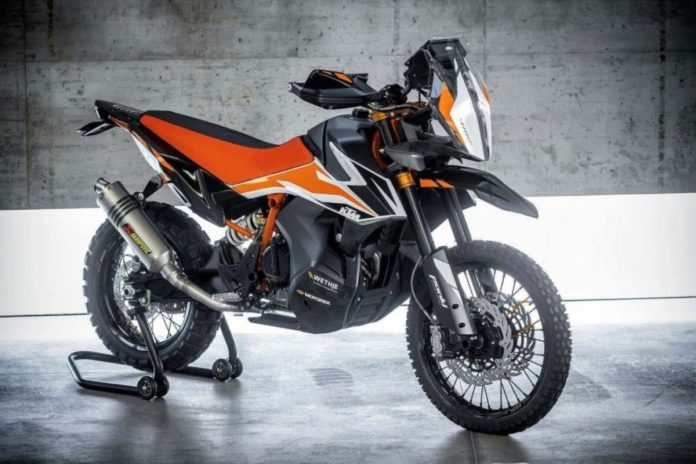 The KTM 390 Adventure has true off-road potential but it has always been limited to light trails because of its gear ratios and alloy wheel setup. Ever since its inception, the internet has been buzzing with conversations about the KTM 390 Adventure’s ability to go off-road or lack of it. The company had even made arguments stating that their alloy wheels were more than capable of overcoming most off-road situations and did so with the ease of tubeless tires. But now, KTM has made the model even more adventurous than before as the 390 Adventure will finally be able to unleash its true off-road potential, thanks to the launch of optional wire-spoke wheels with tube tires which will be provided as part of KTM’s Powerparts catalog to replace the alloy tubeless tires. The overall set up will remain the same with the 19-inch wheels upfront & 17-inch wheels at the back.

KTM has announced the off-road kit for international markets as part of their Powerparts range, but the brand is still yet to make official announcements for a launch in India. This kit includes everything you require to convert from standard cast wheels to spoke rims, including the disc brakes for both ends and a rear sprocket. The thing that is not clear is the actual size of the rear sprocket and the price for the entire setup. Nevertheless, switching the current alloy wheels for spoked rims should ensure the correct balance between flexibility and stiffness, thus giving more confidence off the beaten path. The kit is best fit for those with a large amount of off-road use and will come with all the components needed to transform to spoke wheels. KTM has announced a revised price for the 390 Adventure with a price increase of Rs 1,800 in India. In addition to that, the company has also launched the 250 Adventure at Rs 2.48 lakh ex-showroom. We are expecting that KTM will announce this along with a few additional Power parts later this year.

Thota Sruthi - November 27, 2021
0
The government will audit the Rs 8 lakh family pay roof for Economically Weaker Sections to apply for 10% held seats in...