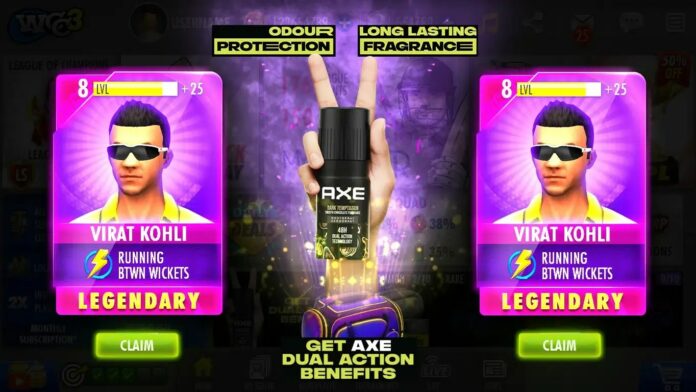 The first-ever in-game integration of Axe Deodorant, implemented by GroupM ESP, has been unveiled for World Cricket Championship 3 (WCC 3). This partnership brings the brand’s promise of twofold advantages to live for gamers, who will be able to upgrade two talents instead of one when confronted with difficult situations in-game.

The partnership comes at a time when the IPL will resume in 2021, spilling over into the ICC World T20. Axe Deodorant has a long history of being involved with gaming, and this is the country’s first-ever in-game relationship.

“We’re happy to have Axe Deodorant chose WCC 3 for its first gaming integration in the country,” says P.R. Rajendran, CEO, and co-founder of Next Wave Multimedia. Given that the cricket season is approaching us, I believe this will increase fan excitement while watching the game. WCC is constantly looking forward to giving its community the finest experience possible, and we’re confident that Axe Deodorant will only add to that!”

Shailendra Singh, HUL’s General Manager of Deodorants, says “Cricket is the first love of most young Indian men. Axe’s integration with WCC 3 brings this first love along with another important passion area – gaming. We’re pleased to encourage young people to step up their game – both digitally and in-person with AXE can”

“We’re happy to have cooperated with Axe on WWC3,” said Vinit Karnik, GroupM South Asia’s Head of Sports, Esports, and Entertainment. Brand communication and targeting the correct consumers become much more concentrated with in-game integration. Users will increasingly engage with material that provides actual value as a result of the rising feeling of consumer value in gaming. It was a natural synergy to bring together Axe and next wave multimedia for this endeavor because gaming is a big and instantly engaging market with customers.”

WCC 3, the most recent installment in the World Cricket Championship (WCC) franchise, has received more than 160 million downloads. The game has been enhanced with new controls, animations, real-time motions of athletes and professional cricketers, women’s cricket, a comprehensive career mode with over 400 tournaments, worldwide leagues, and much more.

Next Wave Multimedia Pvt. Ltd. of Chennai, which is a subsidiary of Nazara Technologies Ltd., a renowned India-based diversified gaming and sports media platform, launched the World Cricket Championship series. The third installment, which will be released in November 2020, is the most recent in the series. The game won the “Studio Game of the Year” award at the Indian Game Developers Conference and the “Users Choice” Award 2020 on the Google Play Store.