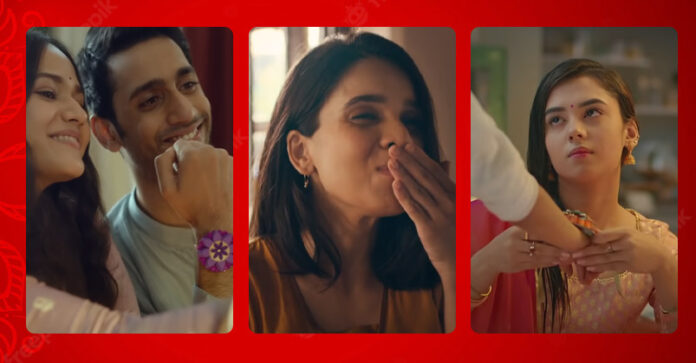 Here are some of the year’s most endearing brand advertisements for Raksha Bandhan:

The advertising campaign highlights the unique link between siblings who will always be there for one another. Having a sibling to always cover for and bridge the gap makes life and a family wholesome, but parents still have reservations about making daughters leave at night while the same rule doesn’t apply to brothers and sons. The campaign is a classic illustration of how Indian households operate.

The “First Roommates” campaign, created and executed by Kinnect, a social media and digital creative agency partner of Asian Paints, shows how upcycling with ezyCR8 can make something exceptional and one-of-a-kind rather than throwing it away.

The Bail Kolhu Rakhi campaign, which was conceptualized by Leads Brand Connect, depicts a brother fulfilling his sister’s longing for nostalgia by bringing her a sharp, sour mango pickle instead of the customary sweet present. The sister’s astonished astonishment that her brother could imitate “maa ke haath ka swaad” adds a subtle element of humor that makes the otherwise somber commercial make you grin.

The brand’s latest campaign playfully builds on the insight that during childhood siblings tend to spend much more time together. Purchased rakhi can be linked with the sister’s phone and a tune would play reminding the brother that he has promised to stay close to her on the occasion. The campaign has been created by Ogilvy and managed by Wavemaker.

The Godrej Brand and Communications team conceptualized the movie, which strives to instill compassion, respect, and love in everyone, much like the brother-sister relationship that is honored on the auspicious day of Raksha Bandhan.

Vachan Suraksha ka, a touching brand movie from Gulf Oil, was released. In this movie, a younger sister persuades her older sibling to enroll in Gulf Oil’s Suraksha Bandhan healthcare program, which will provide for her brother’s needs after the sister’s wedding. The advertisement was written by DDB Mudra and was shot and directed by Mayank Yadav of Bubblewrap Entertainment.

The House of Titan fragrance company SKINN is returning with its #BestSaidWithSkinn campaign. The company debuts a brand-new digital video campaign made by the Ogilvy & Mather agency featuring the famous fashion designer and film producer Rhea Kapoor and actor Hashvardhan Kapoor, who are siblings. The video portrays an unspoken love and bond so strong that we would do anything for them despite silly arguments and bickering.