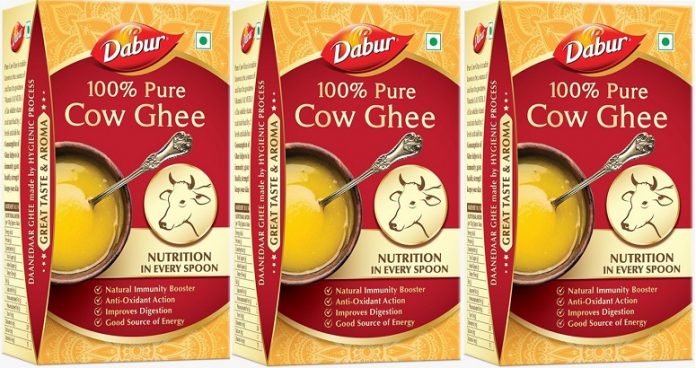 The Ayurveda market is riding its wellness credentials in the increasingly fragmented market while still depending on the health element of ghee.

What does Dabur have to do with the milk business? It is the second most-consumed dairy commodity in India, only after milk. The newly-launched cow ghee from Dabur signals the entrance of the company into the dairy segment of India, joining Amul territory.

Ghee in India is as ancient as the mythology of Hinduism. It is popularly believed that by rubbing his palms, the creator god ‘Prajapati’ first created ghee. However, since long before dairy brands made ghee into a CPG (consumer packaged good), Indians have been producing their own ghee, and they still do.

The Indian ghee market was pegged in 2019 at Rs 2.273 billion, according to market research company IMARC. By 2024, it is projected to cross Rs 4.653 billion. The sector is mostly split into cow and buffalo ghee, and milk cooperatives dominate it. The top ghee consumers are states like Uttar Pradesh, Rajasthan, and Madhya Pradesh.

Ghee is also among the most crowded, as a section. There are several large regional brands, such as Jharna/Monorama in West Bengal, Saras in Rajasthan, etc., besides leading national players like Amul, Gowardhan, Nestle Everyday, etc. Anik, Milkfood, Madhusudhan, Ananda, Parag, Aashirvaad (ITC), Mother Dairy and so on are other common names.

It costs about Rs 500 for a one-liter pack of ghee. It also happens to be the SKU with the most intake. Dabur Ghee has a price per liter of Rs 599. The room also contains several smaller brands, apart from the big brands, offering premium differentiators such as ‘organic’,’ historically made’, and ‘milk from unique Indian cow breeds’.

Traditionally, unlike the common method of making it from separated milk fat, ghee is prepared by churning curdled milk. Organic means the cows are fed on the grass without the help of any hormones completely raised on the farm grass feed. One such existing organic brand is Akshayakalpa. etc.

Then there is ‘Vedic’ ghee, which, by conventional processes as prescribed in Ayurveda, is developed from Indian cow milk (A2 milk) from races such as Gir and Tharparkar (Kesariya Farm, Shri Radhey, and Kapiva). These versions are cost upwards of Rs 700 and up to a few thousand rupees per liter.

Dabur says that it can trace its ghee back to “indigenous cows bred in Rajasthan. Under the former group of famous brands, Dabur will be competing. The brand has latched on to the influential and ancient association between ghee and Ayurveda, which prescribes ghee for general well-being. In several Ayurvedic preparations, including Dabur’s flagship oil, Chyawanprash, it is also used as an ingredient. Baidyanath and Patanjali are other important Ayurveda players who give ghee.

To stick out in the crowd, the wellbeing element of ghee is emphasized by Dabur. The pack sets forth the nutrient and health advantages of ghee, such as improving immunity, digestion, and antioxidant effects, apart from the standard consistency criteria, such as flavor, texture, source, and aroma. aThe tagline reads, ‘Food with every spoon.’ Dabur has also highlighted its ‘100% pure’ guarantee on the packing prominently.