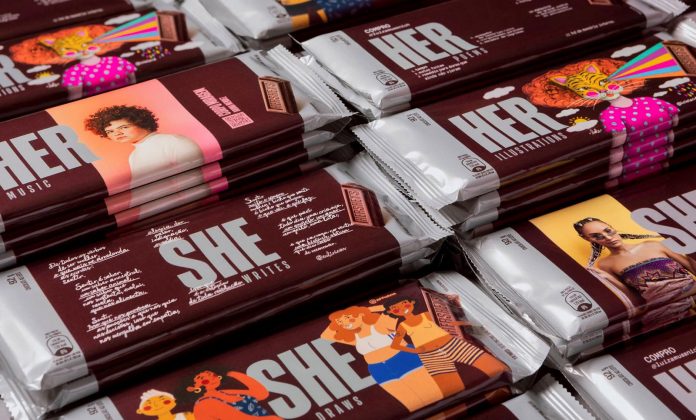 The Hershey Company, an American multinational company with its headquarters in Pennsylvania, that sells and manufactures chocolate, baked products such as cookies and cakes, beverages, and many more products across the globe launched an “HER-SHE” campaign this year on international women’s day.

The campaign crossed two million viewers as of the 25th of July. As a result of the campaign, Hershey’s chocolate bar became a canvas for the “SHEROES” of today’s world.

Through the campaign, the company wanted to celebrate unsung women achievers across various fields of life. The company collaborated with phenomenal women like Kriti Bharti, Sairee Chahal, Falguni Vasavada, and Roxanne Davur. Illustrators such as Maanvi Kapur, Surabhi Banerjee, Anandhi Kumar, and Ansushri Saraogi designed the packs of the chocolate bars, as shown in the image above. Each pack of chocolate had a carefully designed wrapper and a small story about the life of the person who designed it at the back. These special wrapper designs were revealed through a digital campaign and aimed to encourage women across the nation to share their own stories of achievement. The company is often seen promoting gender equality and diversity. Other female participants will also be invited as a part of the digital campaign to share their illustrations on social media platforms using the #HerShe. This campaign is actually an extension of a global campaign launched in Brazil in 2019.

Rohit Grover, President, Hershey International, said, “The recognition of the important contributions women make every day in our society and the need to create an outlet for their voice was a key insight that gave rise to our special packaging and marketing campaign. So many women are doing incredible things every day and yet are largely unknown.  These programs gave them a platform and brought them to light to celebrate their amazing contributions,”

The campaign crossed over two million views on Instagram and led to the promotion of “SHEROES”. The campaign is proof of how Hershey’s is constantly trying to bring forth the voices of women. The company has a deep commitment to equality, diversity, and inclusion; it committed to pay women $1 for $1, compared to their male counterparts.

Nitin Pillai - September 20, 2021
0
In June 2021, El Salvador, a little waterfront country in Central America, turned into the first on the planet to make Bitcoin,...