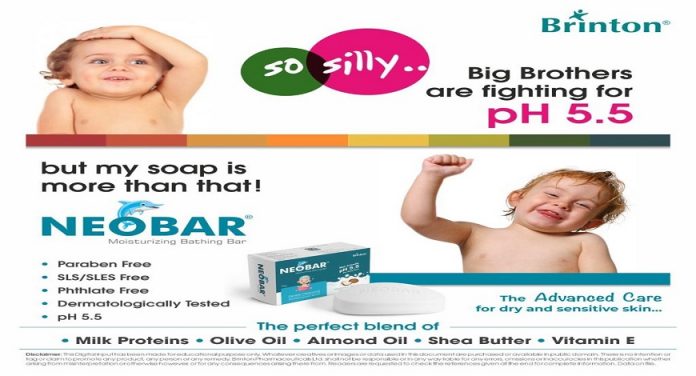 Brinton has been one of the fastest-growing multinational pharmaceutical firms in India, expanding its network around the globe.

Brinton has a super-wealthy and ever-changing portfolio of state-of-the-art Research and development activities, manufacturing, marketing, and sales resources that ensure that its customers meet unmet medical needs and improve their lives to deliver value.

Today, other than India, they have a worldwide presence with highly dedicated and skilled employees who work diligently to improve our product offerings through constant research, development, innovation, and eminent marketing and sales capabilities.

An apt campaign called ‘No pHighting Please’ has been launched by Brinton, the pharmaceutical company, to nudge the two biggies not to fight alone over PH levels. The campaign witnessed is how the F has been replaced in battle with PH, keeping in mind that the giants are struggling for PH levels as well as the phonetic feature of PH that is used to sound F.

Everything is tuned in to the huge battle between two titans fighting over the advertising campaign that each of them had teasingly launched over the weekend. The advertising campaign concentrated on the competitors’ soaps that named the exact soap brand and compared the soaps’ PH levels of both themselves and competitors. Obviously, with the competition, this did not go too well and led to a legal battle between the two.

But is the soaps’ PH degree an aspect worth fighting for? No, says Mr. Rahul Darda, Chairman & CEO of Brinton Pharmaceuticals Limited. He then argues that “whether it contains other harmful chemicals or whether it is free of PSPM and more, the components of the soap, its syndet base, is what matters. Sending half-baked details to the end-user is contemplating only one factor and creating a campaign over it. This is precisely why we have chosen to start this initiative to empower the customer to make a more educated decision about what might have a big effect on the skin.”

“This campaign has been well received by our customers, Mr. Darda stated, and the brand receives lots of one-on-one messages thanking us to clear the air about what should be taken into account when making the purchase decision.” The Brinton-Neobar soap brand will continue to scream the fight against disinformation or the distribution of half-baked details, with the launch of numerous creatives and messaging over the more weeks to come.

Ananthu B S - March 2, 2021
0
United We Care, an application and online stage for your passionate prosperity is asking individuals to #MindIt with regards to tending to...